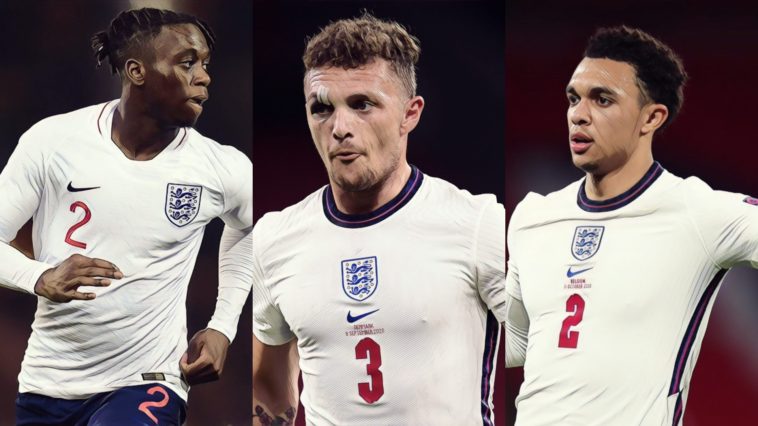 England will head into this summer’s European Championship as one of the favourites to reach the latter stages, expectations having increased following a strong showing at the 2018 Men’s World Cup and the emergence of several bright prospects.

Gareth Southgate has just five fixtures to fine-tune his side ahead of the tournament, with World Cup qualifiers against San Marino, Albania and Poland to come over the next week, before two warm-up clashes before the action begins in June.

Competition for places is fierce among the Three Lions squad, though perhaps no position is blessed with quite such quality as right-back. England possess an abundance of options who are all competing for a place in Southgate’s final 23.

With such an embarrassment of riches, The Football Faithful spoke exclusively to former England full-back Michael Gray on a position of strength for the Three Lions to assess the lead contenders to make the squad.

Tripper remains a favourite of Southgate and has featured prominently during the manager’s reign as England boss, impressing during the 2018 World Cup with his forward threat and set-piece delivery.

The 30-year-old was handed his debut by Southgate against France in 2017 and has remained largely a permanent fixture in the squad since, winning 25 caps and scoring once.

After an indifferent period at Tottenham following the World Cup in Russia, the right-back signed for Atletico Madrid in a shock deal the following summer and has impressed since making the move to the Spanish capital.

Tripper has enjoyed a strong campaign for Atletico despite a 10-week ban for breaching gambling restrictions, providing six assists in 18 league appearances for Diego Simeone’s side who lead the title race in their pursuit of a first La Liga crown since 2013/14.

Trippier’s form as part of a miserly defence that has conceded just 18 goals in 28 fixtures strengthens his claim for a place in the squad, whilst Southgate is fond of his versatility having also used the star at left wing-back.

Named as captain of a rotational side against Wales in November, his previous performances for England make him a lead contender to make the final squad.

The most experienced option on this list, Kyle Walker has won 53 caps for the national side. Only Raheem Sterling has won more caps than the Yorkshireman among those called up in Southgate’s squad for the forthcoming internationals behind.

Walker has featured at right-back and on the right of a back three for England under the current regime, his athleticism and recovery speed a valuable addition to the backline.

Gray believes the Manchester City full-back should be in the final 23, pointing to the fact that Walker’s experience at the very highest level and versatility could prove priceless to England in the latter stages of a major tournament.

“Kyle Walker’s having an amazing season, I know he’s not playing every week but he’s got the experience of playing in big competitions already, ” he says.

“He’s still one of the quickest full-backs around and you’ve got the added that he can slot into that centre-back position if you want to change the system.”

Alexander-Arnold was a notable omission from the recent England squad for March’s World Cup qualifiers, the full-back’s form dipping below the standards he set in the previous two seasons in a disappointing 2020/21 campaign for Liverpool.

The 22-year-old has been one of the Premier League’s finest footballers over the past two campaigns, however, breaking divisional records for assists by a defender and winning the Champions League and Premier League under Jurgen Klopp.

Whilst those showings are yet to truly be replicated in an England shirt, Gray believes Alexander-Arnold’s attacking threat should ensure his place in the Three Lions’ squad this summer.

“I think barring the beginning of this season everyone was looking at Trent Alexander-Arnold, over the last couple of seasons he’s kind of renamed that full-back position,” Gray tells us.

“He’s more of a wide player who has got fantastic end product, whether it be crosses or scoring goals, he’s been unbelievable, he really has.”

After producing 25 assists over the past two seasons, Alexander-Arnold has managed just three for the current campaign, though his underlying statistics still compare favourably to his right-back rivals.

The full-back averages more touches than any other player in the Premier League and leads the division for crosses, whilst his chances created figures and expected assists are higher than any other English right-back.

Although he has been questioned defensively, his tackle win rate percentage also ranks behind only Manchester United’s Aaron Wan-Bissaka amongst contenders for the squad.

Ranking the five best full-back pairings in the Premier League

Reece James is the player who has been selected ahead of Alexander-Arnold in the latest squad, with Southgate saying the youngster’s “exceptional form” has merited his inclusion.

James is a player who combines all the attributes needed of the modern full-back, with the Chelsea defender’s pace, power and superb delivery allowing him to thrive when attacking from deep.

The 21-year-old made his senior debut last October and has since won four senior caps, impressing in his initial performances for the Three Lions to state his case for more regular involvement.

Chelsea’s move to a back three formation under Thomas Tuchel has paid dividends with a record of 12 clean sheets in 14 appearances, a familiarity with a system often used by Southgate strengthening his claim for a place in the squad.

James also has previous experience of playing in midfield, versatility which can prove valuable in tournament football with England lacking depth in terms of defensive-minded midfield players.

Having made an impression on Southgate in his fleeting appearances so far, this month’s international break provides James with a real chance to secure his shirt ahead of this summer’s European Championship.

Overlooked once more, Wan-Bissaka has previously been called up to the squad but remains uncapped, with the Democratic Republic of Congo monitoring his situation as they bid to persuade the defender to change allegiance.

Wan-Bissaka has been a regular in the Manchester United side and has won plaudits for his defensive capabilities, leading the Premier League for tackles and interceptions combined so far this season.

The 23-year-old’s forward threat has been questioned, however, and Gray believes it is an area the defender must improve if he is to force his way into the reckoning.

“In the final third he’s got to really work on his game,” Gray tells us.

“As a defender and one-vs-one, I think he’s the best in the Premier League, I really do.

“But sometimes he just looks a little bit nervy on the ball for me and his passing and end product has got to improve. If you’re playing for a club like Manchester United, he gives the ball away a little too much for my liking.”

Uncapped and not included in Southgate’s most recent squad, Wan-Bissaka appears to face an uphill battle to secure his place in the squad this summer.

Breaking into the squad ahead of the aforementioned names will be a huge task for any player, with Aston Villa’s Matty Cash perhaps best placed to challenge.

The 23-year-old has enjoyed an excellent first season in the Premier League since signing from Nottingham Forest, with the right-back name checked by Southgate following the announcement of his latest squad.

Southgate has been a keen watcher of Aston Villa this season with forward Ollie Watkins earning a maiden call this month, joining Jack Grealish and Tyrone Mings in entering England’s plans.

Southgate also mentioned Leeds’ full-back Luke Ayling as a player who adds further depth to the options, whilst Brighton’s Tariq Lamptey has impressed this season before ongoing injury problems halted his progress.

Norwich City’s Max Aarons is another player tipped with progressing to the senior ranks, though has been included in the U21 squad for their European Championship campaign.