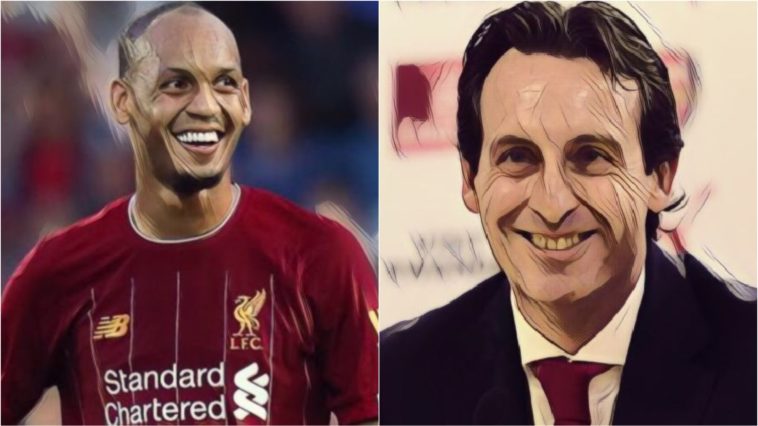 Arsenal manager Unai Emery has revealed he was interested in signing Fabinho before the midfielder’s move to Liverpool in 2018.

The Brazilian international moved to Liverpool in a £40m deal from Monaco last year, with the 26-year-old playing an instrumental role in the club’s Champions League victory last season.

Fabinho was part of the Monaco side which pipped Emery’s Paris Saint-Germain team to the Ligue 1 title in 2017, and the now Arsenal boss has revealed he was interested in signing the midfielder following his appointment at the club last year.

Arsenal were amongst the highest spending sides in the Premier League this summer as they look to build a squad capable of a top four finish, spending a club-record £72m to sign Ivory Coast winger Nicolas Pepe from Lille and a further £25m on Celtic full-back Kieran Tierney.

Pepe has so far struggled to adapt to the demands of the English game following his move from Ligue 1, though Emery pointed to the slow adaptation of Fabinho at Anfield as evidence that players need time to settle in the Premier League.

“We spent money with Pepe, but Pepe needs time to adapt to the Premier League,” Emery said in his pre-match press conference.

“For example, in France I loved a lot Fabinho. He was in Monaco and I wanted to sign him for Paris Saint-Germain.

“When I arrived here, also his name was on the table to achieve to sign him, but he signed for Liverpool.

“The first six months he didn’t play, it was adaptation. But now he is amazing and I want the same with (Dani) Ceballos, with Pepe.

“We need patience, but Pepe is improving. On Monday, the key to win was with him. If he scores the first goal, it’s different.

“But it’s one process and I believe in him and I know we need time and patience. The supporters have patience, some more than others.”

Read: Petit can’t understand why Arsenal made Xhaka their captain