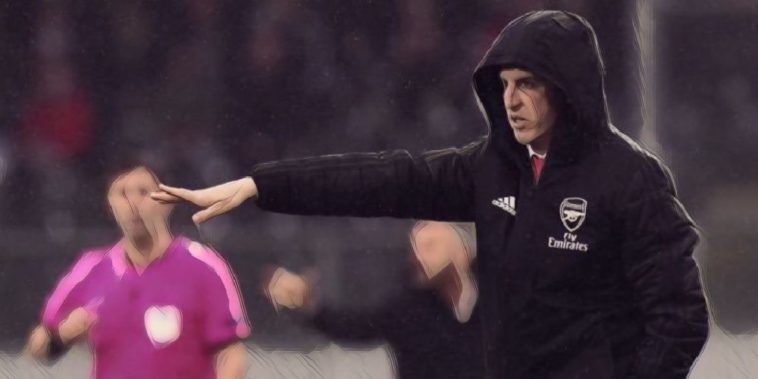 Arsenal’s disappointing start to the season continued this afternoon, with Vitoria Guimaraes scoring a late equaliser in their Europa League group stage game in Portugal.

The pressure has been on the Unai Emery in recent months, with speculation suggesting that the Spanish coach could be just a handful of games away from being sacked following an underwhelming 18-month spell at the club.

Arsenal took the lead in the 80th minute through much-maligned defender Shkodran Mustafi, though were once again unable to stay in front, Bruno Duarte da Silva netting a 91st-minute equaliser in a spirited finale for the Portuguese outfit, who went into the game without a single point on the board.

Arsenal have led in each of their last four games across all competitions:

'Tactically, it worked how we wanted.' 🙃 pic.twitter.com/azHJkWHDUB

The 1-1 draw comes on the back of a run of disappointing results, the Gunners winning just one of their last six matches – the reverse fixture against Vitoria at the Emirates last month.

However, in comments that are likely to do little for his popularity among the Arsenal faithful, Unai Emery said that his side ‘tried’, reminding fans that the Gunners currently sit at the top of Group F in their quest for qualification.

“The players tried and we were close to winning but in the last minute, they pushed a lot and scored.” Emery told BT Sport.

“In the Europa League it’s about being first in the group and at the moment we are. It’s still a possibility to be [finish] first.

“We tried. They are a very competitive team and it was very important for us to be strong defensively. I think we did that and we did better offensively. It’s not easy to have a lot of chances. We want to win but in the table, we are the first and that is our target.”

‘Unbelievable’ Rodgers could ‘transform’ Arsenal according to Merson