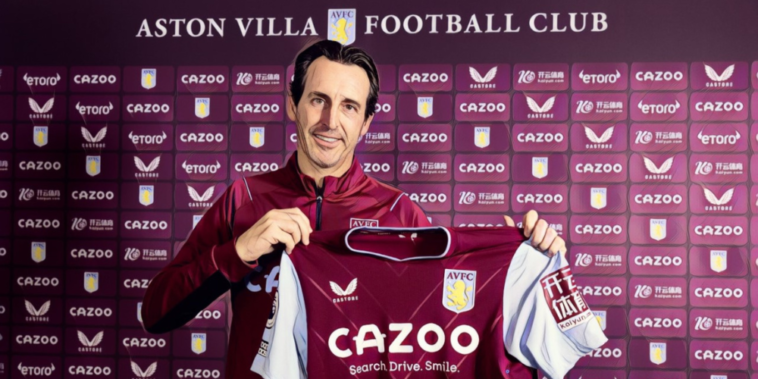 Unai Emery has outlined his ambitions for Aston Villa ahead of his first fixture in charge against Manchester United this weekend.

Emery has been named as the new head coach of Villa, replacing Steven Gerrard following a disappointing start to the season at Villa Park. Villa are 16th, just a point outside the relegation places and have turned to an experienced European coach to move the club forward.

The Spaniard has won a record-breaking four Europa League titles across spells at Sevilla and Villarreal, while he has past experience of the Premier League following a stint at Arsenal.

“I am happy to be here,” he told his pre-match press conference.

“I decided to come here because it’s a great project and our ambition is going to be together, step-by-step.

“I want to improve here, to help with my experiences. But at the beginning, we are going to think by each match and that starts with Manchester United.”

Emery outlined his ambition to win silverware with the club, who have not won a major honour since lifting the League Cup in 1996.

The 51-year-old – who has specialised in continental competition and led Villarreal to the last four of the Champions League in 2021/22 – also has ambitions of a European return.

“My dream is to win a trophy with Aston Villa,” he said. “It’s my personal challenge at the beginning.

“My second dream, my objective will be to play in Europe.

“But now, we have to start thinking only to the next match because we are not in a good position in table.

“Each match is going to give us a lot of info from players. I want to test individual and collectively the players.”

Emery spent 18 months at Arsenal, but was sacked following a run of seven games without a win during the 2018/19 campaign. He believes he has benefitted from that experience as he prepares for the ‘big challenge’ of achieving success in the Premier League.

“I learned a lot,” he said. “Overall, each team gave us some experiences playing against them when I was at Arsenal.