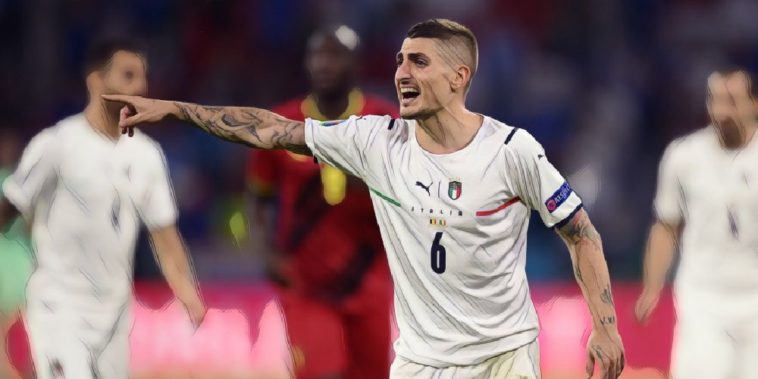 Euro 2020’s final four have been confirmed after another round of action-packed fixtures, one of which saw heavy favourites Belgium sent packing.

Friday evening saw a spirited Switzerland side undone on penalties against Spain, despite some goalkeeping heroics from Yann Sommer, before arguably the game of the round saw Italy run out deserved winners against Roberto Martinez’s experienced side.

The following night’s fixtures saw Denmark survive a late Czech Republic rally to hang on for victory, while England ensured it would be back-to-back major tournament semi-finals after hitting Ukraine for four in Rome.

Here are the standout showings from the quarter-final ties.

Fresh off the back of the best goalscoring campaign of his Serie A career, with an impressive 19 goals in 35 league games, the Napoli forward has continued that form at Euro 2020, adding his second goal of the tournament against Belgium.

The 30-year-old has been impressing in Naples for over a decade now, yet this tournament appears to be a real breakthrough moment at international level, as he looks to be the man capable of providing that moment of magic in the final third for his country.

In the quarter-final clash, he did just that, handing his side a two-goal lead after a stunning strike just before half-time, the diminutive winger cutting in off the left before unleashing a curling effort that flew past a helpless Thibaut Courtois.

With Belgium hitting back not long after through a Romelu Lukaku penalty, much of the second-half relied upon the defensive solidity of Juventus’ veteran duo, Giorgio Chiellini and Leonardo Bonucci, yet Insigne continued to provide an outlet on the left flank, his trickery and speed a real asset in the final third.

With Spain to come in the next round, it throws up a potentially intriguing battle between the Italian and Chelsea right-back, Cesar Azpilicueta, a clash that could potentially define who reaches the showpiece.

It’s not been a straightforward journey for the 25-year-old, either at club level or on the international stage, yet the Manchester United man finally looks to be fulfilling his potential over seven years after having initially made his England debut.

The left-back enjoyed undoubtedly his finest campaign to date at Old Trafford last term, developing into a key figure of Ole Gunnar Solskjaer’s side and edging Bruno Fernandes to win the clubs Player’s Player of the Year award.

Despite that impressive season, his place in Gareth Southgate’s starting XI seemed far from assured heading into the tournament, a fact that was only heightened by the manager’s decision to opt for usual right-back Kieran Tripper on the left of the defence in the opening game.

After earning a start against Scotland in the second group game, Shaw has kept his place ever since, producing particularly impressive displays against both Germany and most recently, Ukraine.

Having played a role in both goals against Joachim Low’s side, including providing the assist for Raheem Sterling’s opener, the full-back then registered two more assists on Saturday night, teeing up both Harry Maguire and Harry Kane to header home in the space of just a few second half minutes.

Not only has his delivery both from open play and free-kick’s been impressive, but the timing of his runs in attack has also caught the eye, while he appears to be forging an excellent relationship with Manchester City man Sterling down the left.

He may have been on the losing side on Friday night, yet the Belgian teenager could have done little more for his side, proving a constant menace down the left-flank for his side.

The 19-year-old had endured a somewhat frustrating season after switching Anderlecht for Ligue 1 side Rennes last summer, yet retained the faith of national boss Roberto Martinez nonetheless, going on to net twice in his embryonic international career thus far.

Having featured off the bench in the group stage against Denmark before starting in the win over Finland, the absence of the injured Eden Hazard saw the youngster handed another chance from the start against Italy – and he certainly didn’t disappoint.

Doku's eight successful dribbles against Italy on Friday were the most by a teenager in a single EURO match since 1980 or World Cup match since 1966.

Playing off the left, the pacy forward overcame a quiet start to develop into Belgium’s key attacking outlet, earning his side a penalty just before the interval with a brilliant turn of speed that forced Giovanni Di Lorenzo into committing a foul.

With his side probing for an equaliser in the second-half, it was Doku who arguably came closest, weaving his way past a handful of defenders before unleashing a fierce effort that rose just over the crossbar, as Martinez’s men ultimately crashed out of the tournament.

The Switzerland stopper must be wondering what more he could have done to help his side progress, as his stellar goalkeeping display ultimately proved in vain as Spain clinched their place in the last four.

The Borussia Monchengladbach stopper had been instrumental in the thrilling last-16 triumph over World Cup holders and tournament favourites France, the goalkeeper denying Paris Saint-Germain sensation Kylian Mpappe from the penalty spot to clinch a remarkable victory for his side.

After the highs of that victory, the Swiss were brought crashing back down to earth after conceding an early Denis Zakaria own goal against Luis Enrique’s side, before fighting back to draw level through talisman Xherdan Shaqiri midway through the second half.

With Vladimir Petkovic’s men keeping Spain at bay, their task was made harder by a controversial Remo Freuler dismissal, the midfielder shown a straight red card for a challenge on Gerard Moreno.

Fortunately for the Swiss, they had a keeper in fine form to blunt the Spanish attack throughout the rest of normal time and extra time, the 32-year-old making eight saves in extra-time alone, before going on to deny both Sergio Busquets and Rodri in the shootout.

That hard graft counted for little, however, as similar shootout heroics from counterpart Unai Simon handed Spain the win, although the Athletic Bilbao stopper was full of praise for Sommer after the game.

There’s a standard belief that it’s not wise to sign a player on the back of a strong tournament showing alone, yet there surely must a line of clubs circling to prize the Danish star from Atalanta.

While he only joined the Italian side from Genk in January, such has been the quality of his displays this summer that it would not surprise anyone to see him plucked by Europe’s elite.

Throughout the tournament, the versatile wing-back has been impressive, his relentless work ethic and quality in the final third proving a real asset for Kasper Hjulmand’s side, particularly in the absence of usual creative spark, Christian Eriksen.

Against the Czech Republic, Maehle produced a piece of skill that the Inter Milan midfielder would no doubt be proud of, setting up forward Kasper Dolberg with an outrageous outside-of-the-boot cross to give Denmark a 2-0 lead.

With the Danes just about hanging on in the second period, they have set up a semi-final clash with England, who may potentially revert to back five in order to counter the energetic Maehle.

Having missed the opening two games of the tournament through injury, the PSG midfielder must have been fearing for his place in the team, particularly following the impressive showings of Sassuolo’s Manuel Locatelli, yet recent games have illustrated just how important he is to Roberto Mancini’s side.

As part of a strong midfield three alongside Nicolo Barella and Jorginho, the 28-year-old is arguably the key man at making his side tick and possesses a superb quality of retaining possession in tight areas.

After featuring against both Wales and Austria, the Italian produced his best showing of the tournament so far against Belgium, acting as the midfield metronome with the opposition simply struggling to get near him.

The playmaking midfielder also played a key role in his side’s opener, teeing up Inter Milan midfielder Nicolo Barella who duly weaved his way through the defence and slotted past Thibaut Courtois.

Every major tournament has its surprise star – take Toto Schillaci at Italia ’90 for example – and this year’s would appear to be Patrik Schick, the Czech Republic striker currently the competition’s joint-top scorer alongside the great, Cristiano Ronaldo.

Having added another from the penalty spot in the draw with Croatia, the 25-year-old then netted late on in the shock win over the Netherlands, to set up a quarter-final clash with Denmark.

That encounter saw the Danes score twice inside the first-half, yet the striker’s neat finish just after the interval sparked hope of a revival, albeit with the Czech’s unable to find that crucial leveller.

Nevertheless, with most of his challengers also out of the competition, the forward still has a chance of coming away from the tournament with a share of the Golden Boot, as well as having greatly enhanced his reputation ahead of a summer in which one or two clubs may be on the lookout for a new centre-forward.

Kane’s brace last night moves him to within two goals of the Golden Boot 🏴󠁧󠁢󠁥󠁮󠁧󠁿 pic.twitter.com/v7vpaGVe94

It’s been a chastening few weeks for the England captain, yet it would appear he is nearing a return to his best, following a brilliant brace against Ukraine in Saturday’s quarter-final thrashing.

The group stage hadn’t been particularly kind to the Tottenham man who looked off the pace in the first two games particularly, resulting in him being substituted with both games still in the balance, a far cry from Gareth Southgate’s almost blatant refusal to withdraw him at the World Cup.

While he was again quiet in the historic victory over Germany, a late well-taken header in that clash seems to have handed him a much-needed injection of confidence, as he looked much sharper against Andriy Shevchenko’s men in the Italian capital.

The 27-year-old edged England ahead just four minutes into the meeting at Rome, turning home from close range after an excellent Raheem Sterling through ball, before heading in his second and the Three Lions’ third early in the second-half with a bullet header.

He almost capped the night with a fierce left-footed effort that was just about tipped wide, with the signs suggesting that he has begun to hit form at just the right time, regardless of the ongoing external speculation about his Spurs future.

Picking a best XI from the Euro 2020 quarter-final games