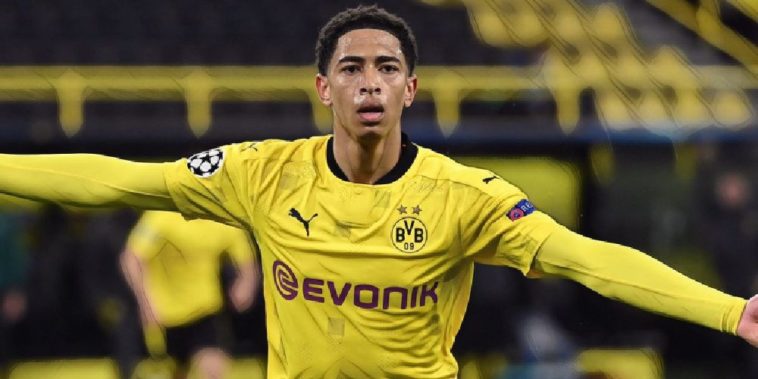 Borussia Dortmund are said to value rising star Jude Bellingham at around £100m, amid potential interest from Chelsea in the 17-year-old.

The England international only made the move to Germany last summer after impressing for Birmingham City in the Championship last season, yet he has quickly made a name for himself at Dortmund, catching the eye with his displays in both the Bundesliga and the Champions League.

Bellingham starred in the recent quarter-final clash with Manchester City, the midfielder putting in bright displays in both the first and second leg, netting a stunning strike in the 2-1 defeat to Pep Guardiola’s side on Wednesday evening, earning lavish praise from the City boss.

Such form from the all-action midfielder has led to calls for a starting place in Gareth Southgate’s European Championship side this summer, as well as sparking speculation of potential interest from Europe’s elite, including sides in the Premier League.

According to Eurosport, his current club are reportedly valuing him at over £100m, a similar fee to what’s being asked for Jadon Sancho and Erling Haaland, with Chelsea one of the side’s said to be interested.

The Blues had long been rumoured with a move for West Ham United midfielder Declan Rice while Frank Lampard was at the helm, yet the arrival of Thomas Tuchel has seemingly altered those plans, Bellingham being considered as the more worthwhile signing, particularly due to his flexibility.

Pep: Bellingham must be lying about his age! 😂

Another brilliant week in the #UCL 😍 pic.twitter.com/3MFqfM2fp9

The mature teenager appears to have the capability to slot in as a holding midfielder, a box-to-box midfielder or even as a number ten, a factor that has made him such an attractive and sought-after prospect.

While Dortmund are currently facing the prospect of no Champions League football next season, the report suggests that Bellingham is in no rush to leave and is looking forward to working under incoming coach Marco Rose, the current Borussia Monchengladbach boss set to take charge next season.

That being said, the report also outlines his desire to play in the Premier League in the future, with Liverpool said to be one of the other side’s keeping an eye on his situation at Westfalenstadion.

Loan Market Adventures: The peaks and troughs of Barkley and Lingard