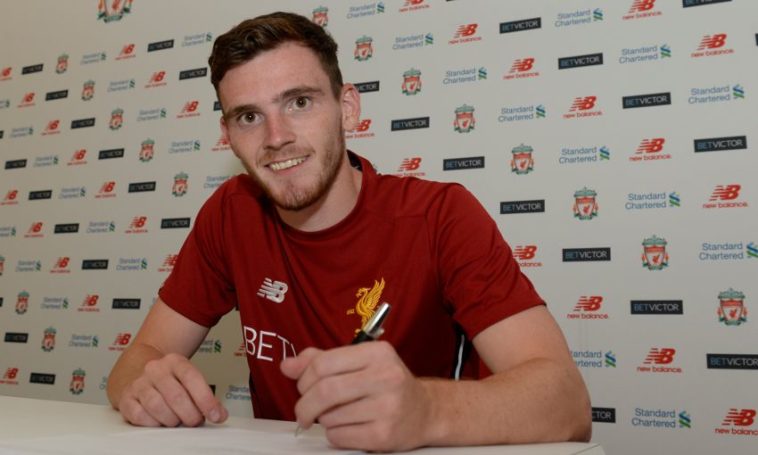 Liverpool have officially announced the signing of Andrew Robertson from Hull City for a fee believed to be £8m rising to £10m.

Liverpool’s long search for a left back appears to be over after the signing of Andrew Robertson. Alberto Moreno has fallen out of favour with Jürgen Klopp and James Milner has been playing out of position for some time.

According to The Times the fee for Robertson is expected to be £8m with the potential to rise to £10m.

Robertson was relegated from the Premier League with Hull City last season but he clearly did enough to convince Klopp he deserves his chance with Liverpool.

The former Hull City man, who will wear the number 26 shirt for the Reds, appears to fit the mould for a Liverpool fullback. Robertson likes the ball at his feet and is perfectly comfortable launching counter-attacks by pushing forward quickly. However there are doubts over his defensive qualities with Robertson sometimes hesitant to break up attacks.

He has represented Scotland 15 times with his only goal coming in a 3-1 loss against bitter rivals England. At 23-years-old Robertson joins a long line of Scots to represent Liverpool.

Liverpool’s first ever signings as a club were nine Scottish players and players such as Dalglish, Souness and Hansen went on to become some of Liverpool’s biggest legends during the glory years. Quite remarkably 36 of Liverpool’s 41 trophies have had a Scottish influence.

Whilst not officially part of the deal, Kevin Stewart is heading in the opposite direction. The 23-year-old defensive midfielder has left Liverpool’s pre-season tour and joined up with the Hull City squad in Portugal. The fee for Stewart is reported by Sky Sports to rise to £7.5m.