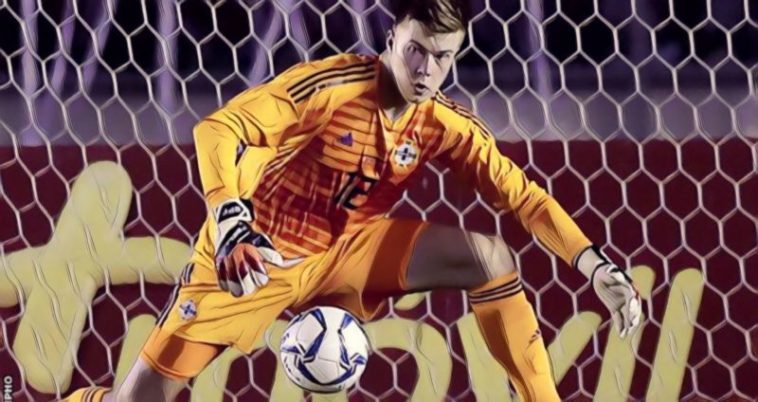 Bailey Peacock-Farrell picked up all the plaudits during the international break after a string of good saves against Germany during Northern Ireland’s Euro 2020 Qualifier.

Indeed, it was a fine performance from the 22-year-old despite the Germans cruising to a comfortable 2-0 win on a night that many thought would belong to Northern Ireland.

Alas, it wasn’t to be for the Green and White Army but what the fixture against Germany has done is spark up a debate about their young goalkeeper Bailey Peacock-Farrell and his engineered move away from Leeds.

During the course of the very early summer of 2019 whilst away on international duty, Peacock-Farrell made it clear that he wasn’t going to stay at his club at the time, Leeds United, if he wasn’t going to be playing regularly. In fact, it’s probably better to revisit the actual quote which was: “I’m not one of those goalkeepers who’s maybe content with sitting on the bench and picking up a wage.”

Strong words from a young man who had made more than one mistake whilst in goal for Leeds during their failed promotion, but things were to get stranger when it emerged that Peacock-Farrell had jumped at the chance to join Burnley during pre-season. The same Burnely with two England international goalkeepers currently challenging each other for the number one shirt.

To everyone’s amazement, given it seemed to go against all of his recent reasoning and desire to play every week, the 22-year-old made his move to Burnely official on 2nd August. Fast forward to the middle of September and Peacock-Farrell hasn’t appeared for Burnley once with his last domestic game coming in a 3-2 win for Leeds over Millwall in March.

Could Bailey Peacock-Farrell have jumped the gun and acted a bit hastily whilst still with Leeds?

It certainly seems so when you consider that for one, laying down an ultimatum to the revered Marcelo Bielsa isn’t the best way to go about getting what you want. Secondly, after Kiko Casilla’s horror show during the play-off semi-final, second-leg defeat to Frank Lampard’s Derby County, the door had indeed opened again for the 22-year-old at Leeds.

If Peacock-Farrell had just stayed put he would have been the number two at a club that for all intents and purposes seems to be headed to the Premier League at a frightening rate of knots. If the football Leeds have been playing isn’t enough to prove that then a quick glance at the promotion odds for the Championship in sports betting from Space Casino will confirm that, with the Whites at a mere 2/5 to go up.

All the signs point towards Leeds being a club on the up which is why Peacock-Farrell’s inability, by his own admission, to turn down a Premier League club makes very little sense. It’s all quite confusing and one is left wondering whether the youngster wants regular football or to play in the Premier League? Either way, it seems like he currently has neither of those things.

To find out where it all went wrong you probably have to go back to January 2019 when Leeds signed Kiko Casilla from Real Madrid in a desperate attempt to stop shipping soft goals. Peacock-Farrell’s mistakes were beginning to hurt Leeds’ shot at automatic promotion and there was a deafening clamour from the fans to address the goalkeeping situation.

Looking back now, the reaction from the fans after Christmas probably hurt Peacock-Farrell and created a wound that hadn’t properly healed by the time the summer came. His demands were most likely borne out of feeling neglected which is a very natural way to feel, especially at such a young age.

What’s done is done now but had Bailey Peacock-Farrell been slightly more economical with his own truth over the summer then maybe he would still be at Leeds now, possibly playing but almost certainly in a much better headspace after having had a holiday to reflect.