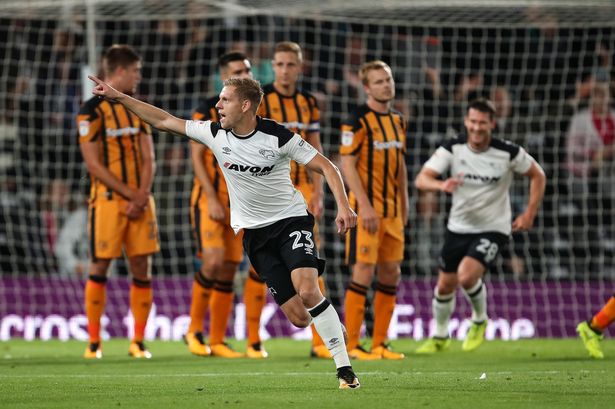 The tie looked liked an even contest on paper, and for the opening 10 minutes or so, both sides cancelled each other out, with neither side creating anything too clear-cut.

However, the game was brought to life when Czech forward Matej Vydra fired his free kick into the back of the net with 15 minutes on the clock.

A further indicator that it wasn’t going to be Hull’s night, was when Sebastian Larsson squandered a great chance to equalise for the Tigers, launching his penalty over the bar and into Pride Park’s South Stand.

But Hull’s first half woes were far from over. David Nugent laid the ball off to Matej Vydra, who scored his second of the game, and four minutes later, former Hull defender Curtis Davies made it 3-0 with his first goal in a Derby shirt.

Bradley Johnson got in on the act before the break too, bagging his first of the night from close range to put the game out of sight for Leonid Slutsky’s men before the second half had even started.

Hull did improve slightly in the second 45, keeping hold of possession better and getting into Derby’s half, however the damage was already done, and Bradley Johnson – who was having his best Derby game for a long time – made it 5-0 just before the hour mark.

Derby ‘keeper Scott Carson was hardly tested in the Rams goal, and perhaps Hull’s closest chance was a Jarrod Bowen header which he nodded just wide of the post.

The win was Derby’s biggest winning margin under Gary Rowett, and the first time the Rams have scored 5 goals in one game since a 5-0 win over Wolves in November 2014. As for Hull, it was their third loss of the season and their heaviest defeat under the management of Leonid Slutsky.