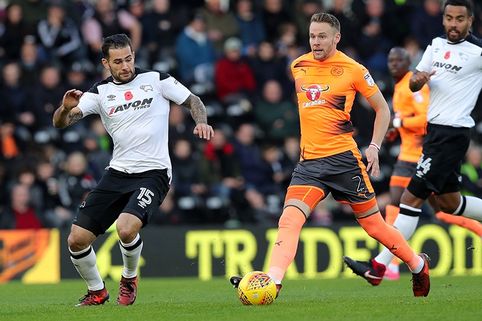 Reading recorded back to back league wins for the first time this season yesterday, picking up three points away to a rather poor looking Derby side.

In their previous two home matches, Derby had had brilliant starts, however it was the opposite way round this weekend as Liam Moore nodded in the opener inside the first ten minutes before Sone Aluko was given time to dance through Derby’s defence and lash home a second just minutes later. Two quickfire goals which came shortly after Rams skipper Richard Keogh was forced off injured.

In a game that seemed over before it had started, Derby never got going and failed to test Royals ‘keeper Vito Mannone at all in the first half, whilst Reading were more than happy to sit on their 2-0 lead.

Gary Rowett’s men made a lively start to the second half, and Tom Lawrence’s effort was well saved by Mannone which gave the home crowd some hope of a fightback. However the Rams shot themselves in the foot moments later when Curtis Davies’ pass was too short to reach Scott Carson, allowing Roy Beerens to round the goalie and pass the ball into an open net.

Jaap Stam’s side are now unbeaten in two games and are seemingly on the up, but there are still questions to be asked of their defence as they have kept just one clean sheet in their last ten games. Johnny Russell got on the scoresheet with a tap-in to make it 3-1.

But once again any hope of a comeback from the hosts was crushed, this time by Mo Barrow. The flag stayed down and allowed the 25 year old to score his third Reading goal.

Many Rams supporters had seen enough and headed for the exits, but those who did stay saw one more goal. Substitute Chris Martin got on the end of an Andre Wisdom cross to score his first league goal for Derby since April of 2016.

Up next for Reading, they face table toppers Wolves at the Mad Stad, while Derby travel to Fulham after having their seven match unbeaten run ended.