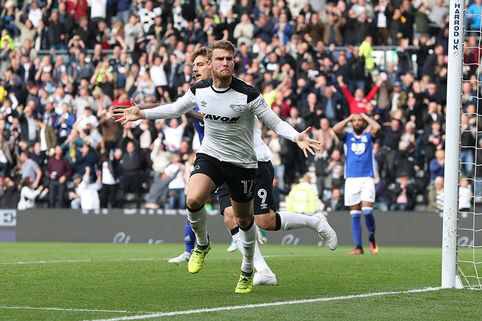 The points were shared at Pride Park Stadium yesterday afternoon as Gary Rowett came up against his former side for the second time since being controversially shown the door back in December.

Birmingham arrived in the East Midlands under the temporary management of Lee Carsley, following the sacking of Harry Redknapp last week which was a result of 6 six straight league defeats.

The Blues – who were without several players through injury –  had the brighter start to the game, forcing a handful of corners inside the first 20 minutes, but never tested Scott Carson in the Derby net.

Neither side looked like scoring in the opening half, and perhaps the best chance fell to David Nugent, who saw his effort tipped round the post by Tomasz Kuszczak.

The game livened up in the second half, and was brought to life just after the hour mark when Birmingham substitute Lukas Jutkiewicz put his side in front, scoring with his first touch. But the lead last just three minutes, as Derby had a super sub of their own. Sam Winnall came off the bench to score his first Derby goal since signing on loan from Sheffield Wednesday on deadline day to level the tie.

Both teams pushed for a winner, but neither Derby or Birmingham could create anything too clear-cut. Rams youngster Mason Bennett was put through on goal, but he fired his shot straight at the Blues ‘keeper.

The game finished all square and ended Birmingham’s losing run, but they still remain without a win since the second game of the season, sitting firmly in the bottom three.

The draw means Gary Rowett has still lost just one home game since taking charge at Derby, and the Rams have lost just 3 of their last 25 matches at Pride Park.

Birmingham still have just one league win to their name this season, and face a tough test midweek as they welcome Sheffield Wednesday to St Andrews on Wednesday night.