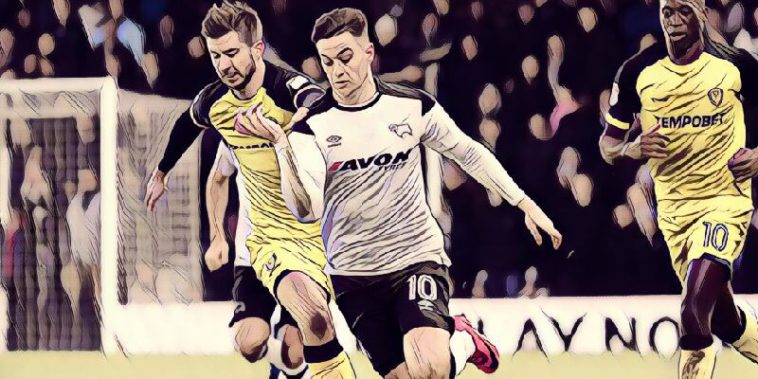 Derby County snatched a late winner against Burton to retain their place in the top six whilst the Brewers languish at the very foot of the table.

Just a few years ago the two managers would’ve been in opposing dugouts for this fixture, and it was Derby’s Gary Rowett who would’ve been more pleased with his side’s first half display as the Rams dominated the game in the opening 45.

Despite seeing a lot of the ball, Derby lacked the cutting edge required to break down a very defensive Burton side and fans were fearing a repeat of Tuesday night’s 1-0 loss to Ipswich. Chris Martin came closest in the first half, seeing his strike from outside the box tipped over the bar by former Rams ‘keeper Stephen Bywater.

There were seven ex-Derby players in Burton’s matchday squad, and centre backs Jake Buxton and Tom Naylor were kept busy as Rowett’s side continued to press in the second half. However Burton did have a couple chances of their own, Ben Turner came close to giving the visitors the lead but was denied by a goal line clearance from Andreas Weimann.

Burton came away with a point from a 0-0 draw last season when they visited Pride Park, and it looked as if history would repeat itself until substitute Johnny Russell – a player Nigel Clough signed while Derby boss – lashed the ball into the back of the net to put the Rams 1-0 up with less than ten minutes of normal time remaining.

Derby held out for their third win in four games, whilst Burton slip to the bottom of the table. Up next for Nigel Clough’s men is a home tie with Preston North End, whilst Derby take on Barnsley.