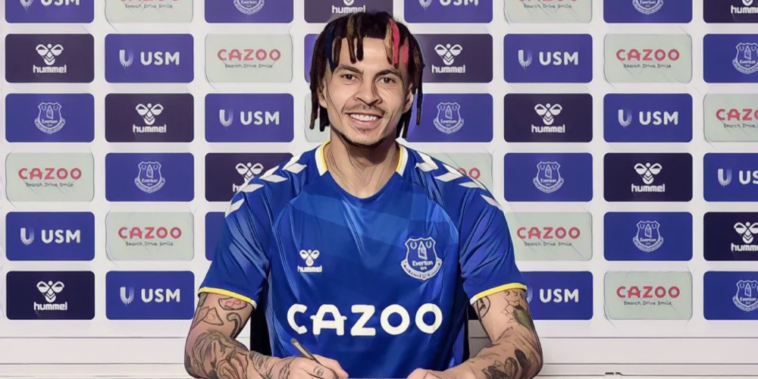 Dele Alli says he is excited to learn from Frank Lampard and believes his move to Everton is the ‘perfect match’.

Everton secured the signing of Alli from Tottenham in the closing stages of the transfer window,  bringing the midfielder to Goodison Park on deadline day.

The 25-year-old had fallen out of favour with the North London side and says he is delighted for a fresh start at Everton – a club he believes is a ‘perfect match’.

“It is a perfect match and I can’t wait to get going,” he told evertontv. “Speaking to the owners and manager and some of the players… we are heading in the same direction, we want to look forward, and that is how I am as a person.

“I don’t ever think anything is enough. You want to achieve as much as you can, score as many goals and get as many wins as you can. To keep building and heading in the right direction. It’s what the Club wants and what I want, too.”

Alli spoke on the influence of Frank Lampard in his decision to join Everton, with the former Chelsea manager having appointed as Rafael Benitez’s successor on Monday.

The new arrival is looking forward to learning from the former goalscoring midfielder as he bid to reignite a career that has stalled in recent seasons.

“He knows me very well as a player, I know him and his tactics and how he likes his teams to work.

Dele Alli in Everton blue is going to take some getting used to 👀🔵 pic.twitter.com/0piv5Mm2ad

“I can learn so much from him. He scored a lot of goals from midfield, I will speak to him about that and the way he fought on the pitch and what he did to make the most of his talent.”

Alli believes the move to Everton will allow him to express himself in attacking areas of the pitch and believes the Toffees’ ambitions match his own as he looks towards a successful spell on Merseyside.

“The owner and Chairman were the first people I spoke to. I felt very comfortable and confident and wanted. As a player, the main thing is to feel wanted. Especially as an attacking and creative player, you want to know you can express yourself and bring excitement to the game, with and without the ball. That’s what I want to do and the kind of player I am.

“I am very ambitious and passionate, so feeling that from the owner and manager drives you on to want to do well for not only them but the whole club.

“I know how much it means to the fans, here, and the team and I want to help as much as I can.”

Alli is hopeful his passion can resonate with the Everton supporters as he looks to get back to his best, the two-time PFA Young Player of the Year hoping to rediscover the form that once made him a key figure for both club and country.

“Working with Frank and the amazing players here, it’s a very attacking way of playing football, that’s what I like to do, to be on the front foot, win tackles, get in the box and score goals,” he said.

“It is an easy place to be happy and an amazing opportunity to come and work hard and be on the pitch and help the team. That’s what I want to do all the time. I want to play and fight for the team and the Club and I am ready to do that.

“The whole thing about being a player is learning and improving and being the best you possibly can. Having all this… amazing teammates, a great manager and very passionate fans, it is a great platform to express yourself and do well.

“I am very passionate when I am playing. It brings the best out of me when I play with aggression and on the front foot.

“Playing against Everton and at Goodison Park, I have seen that’s how the fans are – very passionate. They are incredible.

“It is not easy when you are on the opposite side but now we are working together I am sure we [Dele and supporters] will be a great team.”