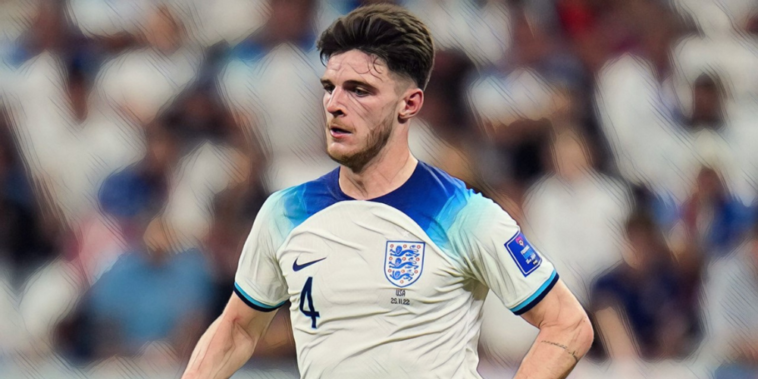 Declan Rice has hinted at an exit from West Ham after restating his desire to play Champions League football.

Rice is with the England squad at the World Cup in Qatar, where he is preparing for the Three Lions’ last-16 clash with Senegal on Sunday.

The midfielder addressed the media ahead of the fixture and opened up on his desire to compete for the biggest trophies with club and country.

Rice has been continually linked with leaving the London Stadium for one of the Premier League’s wealthiest sides in recent windows, but West Ham’s valuation in excess of £100m has put off bidders.

Chelsea, Manchester United and Manchester City have all been linked, while there has been speculation that Newcastle could look to make Rice a statement signing – should the club secure Champions League qualification.

Rice has 18 months remaining on his current contract, though West Ham have the option to extend his deal for a further season. However, there is an expectation that the Hammers will allow the club captain to depart next summer, should a suitable bid arrive.

“One hundred per cent I want to play in the Champions League,” Rice said at a press conference on his ambitions.

“For the last two or three years I’ve been saying that. I’ve been playing consistently well for my club and I feel like I really want to keep pushing. I see my friends here who are playing Champions League and for big trophies.

“You only get one career and at the end you want to look back at what you’ve won and the biggest games you’ve played in.”