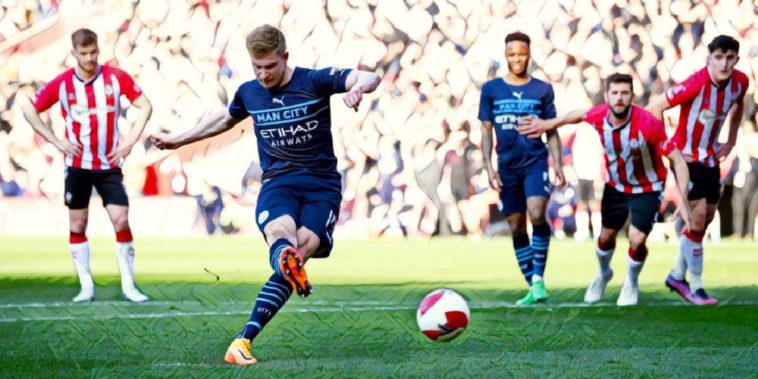 Manchester City cruised into the semi-finals of the FA Cup with a 4-1 win over Southampton at St Marys on Sunday afternoon.

In the 12th minute, City would take the lead through Raheem Sterling, Jack Stephens fluffing an attempted clearance as Gabriel Jesus pounced on a loose ball before squaring to Sterling, whose first-time strike took a slight deflection off Tino Livramento.

Ilkay Gundogan hit the post and Gabriel Jesus dragged a shot narrowly wide as City looked to extend their lead, although Southampton showed plenty of attacking endeavour at the other end, and the Saints would haul themselves level on the stroke of half time. Mohamed Elyounoussi got in behind the City defence and his attempted cut-back from the right took a big deflection off Aymeric Laporte and went beyond Zack Steffen in the City goal.

City would go back ahead 17 minutes into the second half, Mohammed Salisu clumsily bringing down Brazilian forward Gabriel Jesus in the box, before Kevin de Bruyne stepped up and comfortably stroked the ball into the bottom corner from the resulting penalty.

City would add a third with 15 minutes to play, the Premier League leaders producing some lovely interplay on the edge of the Southampton box, before the ball fell to Phil Foden who emphatically lashed it home beyond Fraser Foster.

Two minutes later and it was four, Joao Cancelo producing a wonderful outside-of-the-boot ball from the left towards Gundogan, the German chesting the ball down into the path of Riyad Mahrez, who fired in low at the near post.

The victory sees Manchester City join Chelsea and Crystal Palace in booking their place in the last four of the FA Cup, and speaking after the game, goalscorer Kevin de Bruyne admitted that he and his teammates weren’t at their best at times, but described Foden and Mahrez’s goals as ‘beautiful’.

“I think the first 20 minutes and the last half an hour we did well,” he told the BBC. “In between we made too many stupid mistakes and even with their goal, we should have just played it out – there were 30 seconds to go until half-time.

“We chose the wrong options and Southampton came back into the game. Not a lot was said at half-time but we had to play better and we did that.

“But I think the reaction was really good – the second half, we dominated and we did much better.

“We didn’t play at our best but after the second goal we did much better – the third and fourth goals were beautiful goals and we saw then how good we can play.

“We want to win every competition we enter, we have lost in a couple of FA Cup semi-finals but we are very happy and privileged we go again and hopefully we can win it this time.”