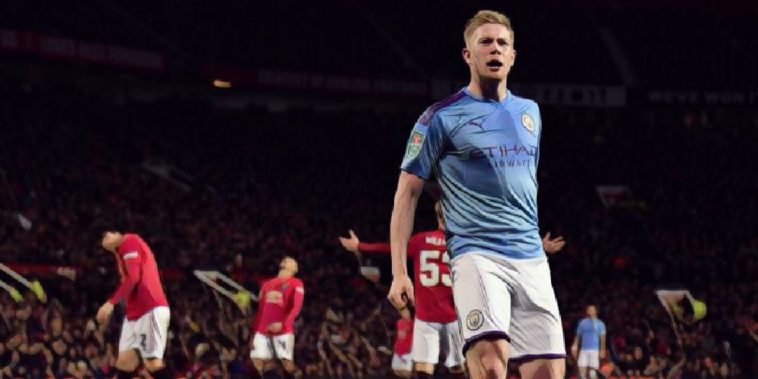 The Premier League champions put in scintillating display in the first-half of their Carabao Cup semi-final first leg, goals from Bernardo Silva, Riyad Mahrez and an own goal from Andreas Pereira opening up a 3-0 lead at the interval.

Man City lined up without a recognised striker, deploying Raheem Sterling, Bernardo and Mahrez as a flexible front three, and the ever-influential midfielder De Bruyne admitted that the Citizens didn’t work on their tactics for very long.

“We did 15 minutes this morning. That’s about it,” De Bruyne said after the game, as per The Guardian. “But it’s not like we never did it before so we did already a sometimes against teams who prefer to play man against man – Cardiff, United, I think Barcelona the way we did it the first year. So we’ve done it a couple of times.”

Marcus Rashford pulled a goal back for Manchester United in the second half, but De Bruyne highlighted how the Citizens restricted United to three shots on target.

“I think overall we played well,” De Bruyne added. “Even the second half they tried to put us under a little bit more pressure and we made one mistake and they got a goal out of it but I don’t think they had a lot of chances.

“I think we should have scored more today but in the end 1-3 is a good advantage. And we know it’s not over but it was a good game for us.

“Bernardo Silva was outstanding and scored a stunning opening goal while Riyad Mahrez added the second. The third was an own goal from Andreas Pereira.”