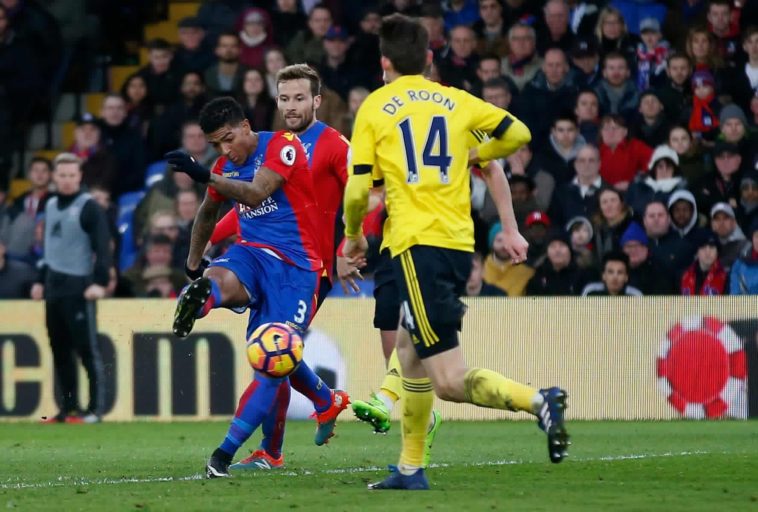 Crystal Palace moved out of the relegation zone and level on points with Middlesbrough after Patrick van Aanholt scored his first goal for the club in a crucial win.

Before the match had kicked off, this game had already been dubbed as a massive 6 pointer. Both teams looking to try and pull away from the relegation zone. Palace fans called for an ‘electric atmosphere’ and they definitely delivered and so did the players.

The intensity from the home players was excellent from the first whistle. Pressing, chasing down and creating plenty of chances. Palace’s first opportunity came from winger Wilf Zaha, attacking down the left hand side before being brought down just inside the penalty area. Referee Bobby Madley, deciding to award a goal kick instead. Replays showing the Ivorian winger was pushed over.

The Palace pressure continued in the first half. Christian Benteke was found by van Aanholt free in the area, but the strikers header was comfortably collected by ‘Boro goalkeeper Victor Valdes.

Middlesbrough best chance of the half came after 25 minutes. A fine passing move in the midfield, Stuart Downing found Gaston Ramirez on the left, with his cross finding Alvaro Negredo at the back post. Palace defender, Mamadou Sakho, making his debut, was on hand to prod the ball away to safety.

Palace got the breakthrough in the 34th minute. Yohan Cabaye initial shot was blocked, the ball rebounded and was cleared by Ayala and fell at the feet of van Aanholt. The Dutch defender took one touch then neatly passed the ball into the bottom right-hand corner beating Valdes.

The rest of the half continued with neither side being able to create any clear cut chances.

The second half started where the first half ended with very few chances. Ten minutes into the second half, Boro had the opportunity to equalise. Firstly Wayne Hennessey got down well to stop Ramirez’s free kick, then Hennessey reacted well to stop Stuani’s shot.

Palace found their groove after this spell of Boro possession. Zaha again working his magic and skipping past his opponents before a fine give and go from captain for the day, Jason Puncheon. Puncheon’s return ball, however, failed to reach Zaha and the onrushing Valdes collected.

The second penalty appeal came from substitute James McArthur. McArthur skipped past Stuart Downing then went to ground. The referee walked past Downing pleading his innocence, and instead booked McArthur for simulation. Replays again showed that Downing’s left foot came in contact with McArthur.

The game was seen out by Palace despite pressure late on from Boro.

The result means Palace climb out of the relegation zone and level on points with their opponents in what was only Sam Allardyce’s second victory in the Premier League and his first at home.

Mamadou Sakho. A fine debut performance, solid at the back despite it being his first appearance in 10 months. Could be the key in Palace’s survival bid this season.