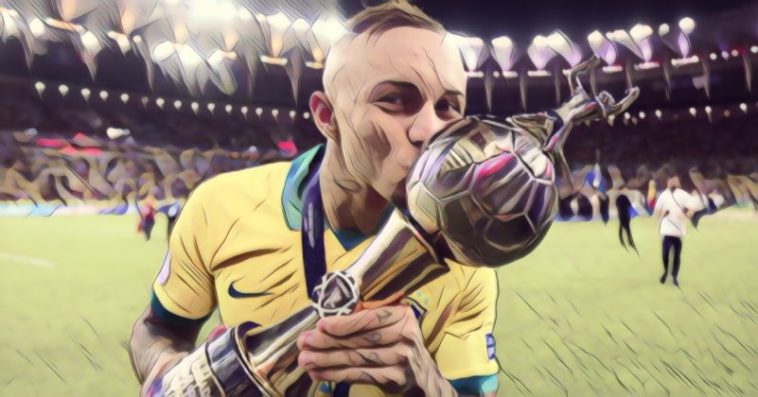 The Copa America came to its tumultuous ending on Sunday evening as an excellent Brazil side saw off the admirable challenge of rank outsiders Peru.

Football’s oldest international tournament is always one to watch and no doubt the best scouts from the Premier League will have swarmed all over Brazil for this year’s finals.

Here’s a look at the five players to have emerged from the Copa, who could well be on the radars of England’s best clubs.

A plucky holding midfielder, capable of excellent distribution and eye for goal; Erick Pulgar is a real talent. The 25-year-old has been at Bologna since 2015 and has recently established himself as a mainstay in the Chilean national team. Pulgar was an ever present as he helped the 2016 champions to a fourth-place finish and notched a first senior goal for his country along the way.

A real threat from set-pieces as well a physical, combative presence in midfield; Pulgar has developed at an already decent level in Serie A and could now be ready for the next step up. Granted, mid-table in Italy to a top-six side in the Premier League is a considerable step up for the Chilean, he could still add some steal to Manchester United or Arsenal’s porous midfield. Available for circa £11 million, he could also be a steal.

The Argentine midfielder has emerged from the Copa America with a growing reputation as one of the most talented young ball players his country has produced in recent years. Despite some talented youngsters coming through the ranks of La Albiceleste, Lo Celso has established himself over the past couple of years for his country and he was one of the few players to escape major heat after Argentina’s wobbly start in the tournament this summer.

A well taken goal against Venezuela helped his side reach the semi-finals and after an excellent year with Real Betis, on-loan from PSG; The Argentinian’s stock is on the rise for sure and he has been linked with Spurs already, where he would be an excellent addition to an already impressive midfield in North London. He wouldn’t come cheap though, with Betis having only just opted to make his loan deal permanent.

Peru’s fierce determination to reach a first final since 1975, captured the imagination of many. Their fairy tale may have been cut short by Brazil, but their stoic efforts have not gone unnoticed. Renato Tapia’s all action displays from defensive midfield caught the eye throughout – particularly in their historic semi-final defeat of Chile. Tapia is not exactly a house hold name, but his rugged displays for Peru, especially his energy and willingness to press, are well suited to the physicality and growing demands of the Premier League.

A 90% pass completion rate in the tournament and a confidence to bring the ball out at his feet, could see the 23-year-old become a real handful in the midfield battlegrounds of the Premier League. Not a top six player for sure, but a decent investment for a club looking over it’s shoulder and needing a bit of bite in front of the back four.

At 28-years-old, Zapata appears to be something of a late bloomer. Signed for Napoli by Rafa Benitez in 2013, he has meandered somewhat during his time in the Italian top flight. A break out campaign in 2018/19 saw him register 23 league goals for Champions League qualifiers Atalanta, and rocket up to second in the top scorer charts. He added to his impressive exploits in front of goal, by notching two for Columbia in their Copa America campaign this summer.

A towering presence in the mold of a traditional number 9, Zapata is a hand full and deadly if the ball falls to him in the box. He could be an ideal second fiddle to Harry Kane at Spurs or a spearhead of a more direct game at Everton under Marco Silva.

A name some of the hipsters may be familiar with! Everton Soares has reportedly been on the radar of some of Europe’s biggest clubs this summer and at 23-years-old, he already has quite the CV.

Top scorer at this year’s tournament for Brazil, the Gremio forward added the Copa America title to his 2017 Copa Libertadores medal. He has also slotted in seamlessly to the Neymar shaped gap in the current Seleção, showing real confidence and genuine enjoyment in the process.

He is a natural number ten and is devastating with the ball at his feet. Audacious skill and some lethal, instinctive finishing have seen him become a star of South American football. It’s only a matter of time before he is plucked by one of Europe’s big boys. He would be a dream in either Liverpool or Manchester City’s lineups, but heaven knows how much he’d cost in the current mayhem of today’s transfer market.