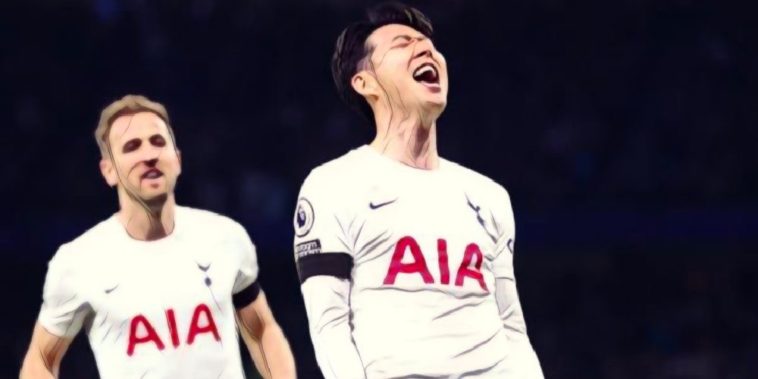 It was a scrappy and cagey start to the game, though in the ninth minute it was Spurs that took the lead. West Ham lost possession inside their own half before Harry Kane burst down the line and drilled a low pass into Son Heung-Min. The ball, however, hit Kurt Zouma before rolling past Lukasz Fabianski.

Son is so often the dangerman for Spurs with his pace in behind, and the South Korean struck the post minutes after the opener, before eventually doubling his side’s lead midway through the first half. Harry Kane once again dropped deep into midfield before threading a perfectly weighted through ball into the path of the 29-year-old, who raced in behind the Hammers defence, before his effort flew past Fabianski – the Polish ‘keeper deceived by another deflection off Zouma.

West Ham would pull one back just after the half-hour mark, a corner from the left being met by Craig Dawson, with the ball dropping to Said Benrahma at the back post who steered it home on the volley.

Both sides had chances in the second half, though with two minutes remaining it was Spurs who made sure of the points, and once again it was thanks to the Kane/Son link up. A simple kick upfield from Hugo Lloris was flicked on by the England captain whose header found his strike partner who had the freedom of North London as picked his spot to make it 3-1.

“I am very delighted not only for the three points but for the performance,” he told BBC Match of the Day.

“Today we played really, really well. We dominated the game from the start until the end. I enjoyed seeing my team play football. Now I repeat we have to continue to work and we are seeing the improvement every week.

🗣️"It's incredible having this striker next to me."

🗣️"I feel sorry for him today that he didn't score"

Son on his partnership with Harry Kane 🔥 pic.twitter.com/R0yrNnuW19

“It’s a pity it is the international break now because we are in great form and are playing really well. But at the same time we now have to rest.

“I think that my team is improving in many aspects. In the last period, despite so many defeats, the performance have been good. To be a strong team you have to be stable.”

The win moves Spurs up to fifth in the Premier League, three points behind rivals Arsenal having played a game more. Conte says he is still hoping to secure Champions League football, and said he was happy with how his team are ‘learning to control the game’.

“We have this ambition, the ambition is to target fourth place,” he said. “Before my arrival this seemed difficult to reach. But now after five months this is starting working.

“We want to stay in this race until the end. It’s very difficult but we are improving in a way that I like. I think we lost two games at home to Southampton and Wolverhampton that killed us in the moment.

“But also it was the right moment to go stronger and to work harder and to continue to make improvements in many aspects.

“This team is growing in the mentality, they are learning to control the game and this is very important.”