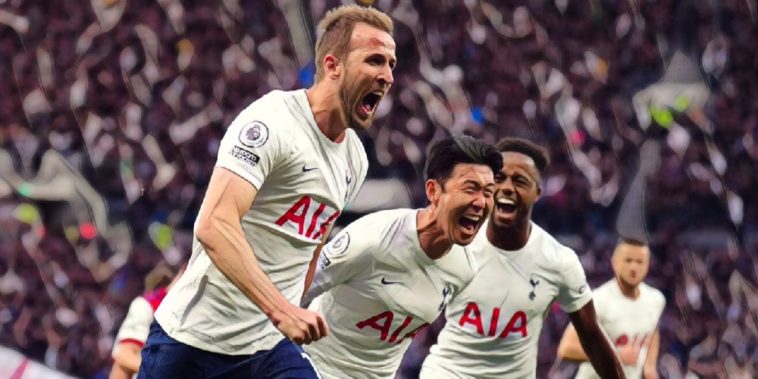 Spurs kept their Champions League dreams alive after a resounding 3-0 win over Arsenal in the North London derby.

It was a game that was due to be played back in January, though the rescheduling set up a perfectly poised top four shootout. Arsenal knew that a win would confirm their Champions League qualification, while a Spurs win would move them to within a point of the top four places with two games to play.

After what was a tentative start to the high-stakes encounter, it was Spurs who struck the first blow as referee Paul Tierney pointed to the spot after Cedric Soares had clumsily bumped Heung Min Son off the ball inside the box. Harry Kane stepped up to face England teammate Aaron Ramsdale, before sending the Arsenal ‘keeper the wrong way to make it 1-0.

The goal seemed to rock the visitors, and in the 33rd minute, Rob Holding was shown a second yellow card in just seven minutes following a coming together with Son, leaving the referee with no option to flash the red as the Gunners’ disciplinary issues under Mikel Arteta reared its head once more.

Minutes after, and with Arsenal deciding against bringing Ben White on as a substitute, Spurs took advantage of their man advantage at a corner, Rodrigo Bentancur’s flick-on being met by Kane at the back post who stooped to nod home from close range for his 13th goal against the Gunners.

Within 90 seconds of the half-time restart, Spurs made it three as Kane produced some strong centre-forward play to hold off Gabriel in the box, before the ball rolled invitingly to Heung Min Son who stroked home this 21st Premier League goal of the season to extend his side’s lead.

Spurs controlled the game from there on in, and while Arsenal had the odd half-chance, they never really looked like pulling a goal back, with the two sides separated by just a point going into the final two games of the campaign.

There was a superb atmosphere from start to finish within the Tottenham Hotspur stadium, and Antonio Conte was keen to thank the Spurs faithful, and called on his players to ‘celebrate in the right way’ ahead of the final week of the season.

“Yeah for sure. The atmosphere was amazing,” he told Sky Sports. “For this reason, we have to give thanks to our fans. They were incredible and pushed us a lot. We repaid them with a good win. We won an important derby and now we are close to them in the table.

“We need to recover very well because we will play on Sunday against a team that has beaten us. I was very clear with my players – to enjoy and celebrate in the right way but at the same time think about Sunday as otherwise this win will not be important.”

Faced with his England teammate, Ramsdale, Harry Kane changed from his usual penalty routine of firing towards the bottom left to slot the game’s opener, though Conte said he is ‘very calm’ when the striker steps up to the spot.

“Harry Kane is very accurate in every training session,” he said. “He stays afterwards to do penalties. I have never seen him make a mistake. Honestly, I’m very calm because I know that he is very good. We are talking about a fantastic striker.

“Our fans, they are going to play an important role on Sunday. We need to go altogether. We are very close to reaching an important target for us. There are no easy games for us.”

Son looked frustrated to be brought off in the second half having moved to within a goal of Mohamed Salah at the top of the scoring charts, and Conte said he was keen to have fresh players ahead of the final few days of the season.

“I know Son Heung-min wanted to continue to play but I had to think not only about this game but to have fresh players,” he said. “They spent a lot of energy. I made the decision to give them a bit of rest. He promised me on Sunday he will go to try to score.”