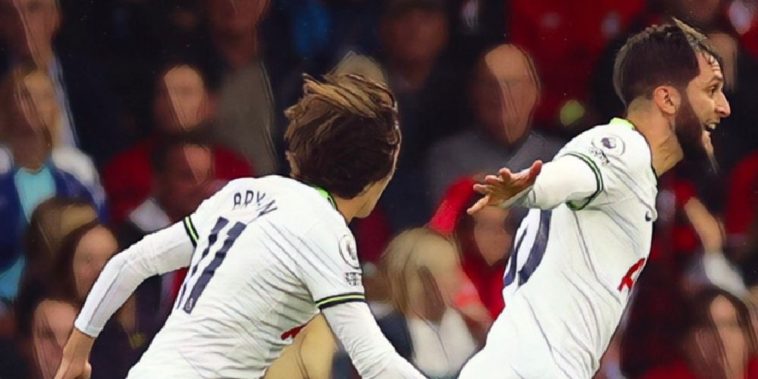 Tottenham Hotspur came from two goals down to secure a last-minute 3-2 victory over Bournemouth at the Vitality Stadium.

Despite sitting third in the Premier League, Tottenham came into the game having failed to win in any of their last three outings in all competitions, with both of their last two league outings ending in defeat.

The visitors dominated the ball in the opening stages as they looked to get back to winning ways, but midway through the first half, they would be stung by a lovely counter-attack. Dominic Solanke held the ball up before laying it off to find the advancing Marcus Tavernier on the right. The 23-year-old continued toward the edge of the area before picking out the unmarked Kieffer Moore who confidently swept the ball into the bottom corner with a tidy first-time finish.

The Welshman doubled Bournemouth’s advantage early into the second half, showing a greater strength and determination than Emerson Royal to get on the end of a whipped Adam Smith cross, the striker’s header crashing in off the underside of the crossbar.

Just minutes later though, Spurs reduced the arrears back to one, with wing-back Ryan Sessegnon – who was about to be substituted – getting on the end of a Pierre-Emile Hojbjerg threaded pass in-behind the Cherries’ defence, before finishing into the bottom corner.

With 15 minutes left to play, the North London outfit hauled themselves level from their 14th corner of the game. Bournemouth ‘keeper Mark Travers got nowhere near Ivan Perisic’s inswinging delivery from the right with Ben Davies meeting the ball at the back post to head his side level.

Following the equaliser, it was all Spurs as they looked to snatch all three points, and saw long-range efforts from Hojbjerg and Clement Lenglet go over the bar.

However, with the game into the second of five added minutes, they would finally get the winner with what was their 23rd attempt of the match. Once again, Bournemouth failed to deal with a Heung Min Son corner from the left, with the ball dropping to Rodrigo Bentancur who stabbed home to seal all three points.

Speaking afterwards, Antonio Conte described the victory as ‘vital’ ahead of their final Champions League group game this week.

“For us, it was really important to win because on Tuesday we are going to play a really important game. To go with enthusiasm, with passion, after this type of win can help us to have more confidence.

“We have to trust much more in ourselves.”

The Italian felt his side showed ‘great character’ to recover from two goals down, but admitted his side are struggling for confidence.

“It was vital to win and despite being 2-0 down, I think we showed great character,” he said.

“At the same time, we had to improve the quality in the passes and then to attack with nasty, and then we created a lot of problems for Bournemouth.

“For the first part of the game, I think we were a bit soft, and we conceded the first goal. then the second half, the second goal, honestly, I prefer to avoid this situation…but you have to take the good reaction of my players.