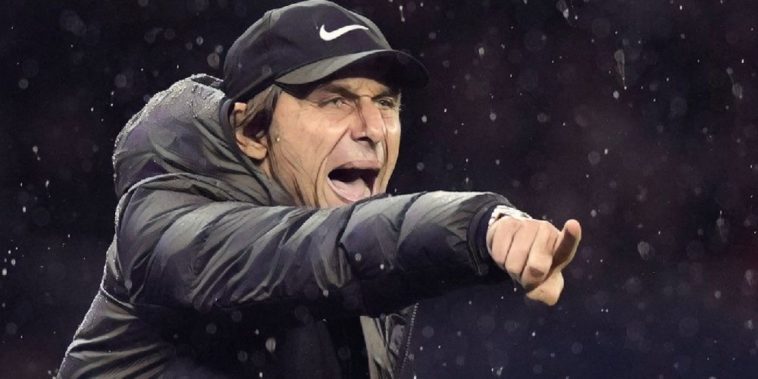 Spurs suffered their second Premier League defeat this week after they were beaten 2-1 at home by fellow top-four hopefuls Newcastle this afternoon.

Antonio Conte’s Spurs almost took an early lead through their infamous Harry Kane/Son Min-Heung combo, but Nick Pope got a hand to the South Korean attacker’s effort and Kieran Trippier was able to clear off the line.

Just after the half-hour mark Eddie Howe’s Newcastle would draw first blood and it would come in controversial fashion. Fabian Schar played a long ball over the top and while Spurs ‘keeper Hugo Lloris beat Callum Wilson to the ball, the pair collided and the Newcastle striker reacted quickest to chip home with his left foot into an empty net.

Then in the 40th minute, Newcastle’s man of the moment, Miguel Almiron, made it 2-0 with a brilliant individual effort, the Paraguay international breezed past Clement Lenglet before stroking his finish under the body of Lloris from a tight angle.

Spurs were loudly booed off at half-time by their fans, but eight minutes into the second half they would find themselves back in the game when talisman Harry Kane nodded home at the back post from a corner.

Those boos from the home support seemed justified the longer the game went on, with Spurs putting in a feeble overall effort to earn themselves a point and Newcastle held on for a win that sees them leapfrog Man United and Chelsea for a place in the top four.

As is becoming a regular theme since his arrival in north London Spurs boss Conte once again seemed to suggest his squad simply isn’t good enough to compete on multiple fronts.

“Not so good. We conceded a goal from a long ball. In our best moment, Newcastle scored their first goal. Their second goal came from a counter-attack. Then it was really difficult to come back.

“We tried. We scored one goal. We didn’t do good enough.

“We are doing our best in every moment. Today the commitment was really high. We have to face a difficult situation for us. When you don’t have three or four players in the squad you’re in trouble.

“We have to manage very well this situation and overcome it together.

“When you play every three days you need to have a deep, strong squad. We have only just started our process. We are playing in the Champions League. We’re trying to improve our situation step by step. You need time and patience. I want to be honest. With my experience, we are doing well but we need time and patience.

“If we played one game every six or seven days, we could fight for something important.”