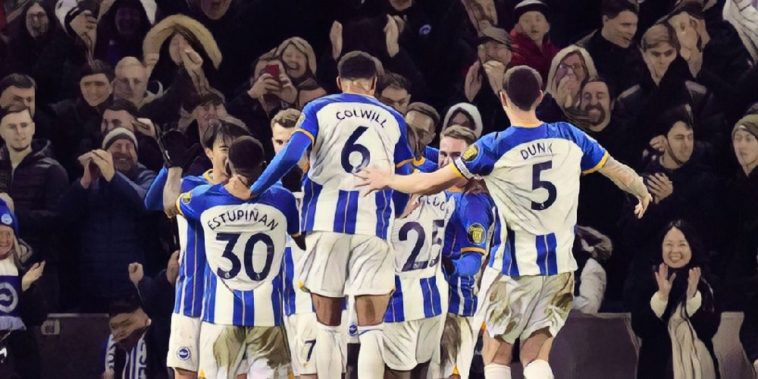 The Reds put in a really disappointing performance as they slipped to a 3-1 defeat in their last Premier League game, before being fortunate to earn a replay as they were held to a draw in their FA Cup tie with Wolves last weekend.

Liverpool came into today’s game against Brighton on the back of a season of inconsistent form and lacking a number of key players, particularly in attacking areas, while their midfield has come in for some severe criticism this season following some under-par displays.

However, their underwhelming season would continue on the South Coast, as Roberto De Zerbi’s side dominated possession from the off, and should have been ahead in the first half had it not been for some wastefulness in front of goal.

They rectified that after the break though as Solly March netted within 60 seconds of the restart, Brighton pouncing on a poor Joel Matip pass, before Kaoru Mitoma poked the ball to March to slide the ball home.

March then made it two just six minutes later, Evan Ferguson sliding the ball into the 28-year-old, who despatched with aplomb with his left to double his goalscoring tally for the season.

Former Manchester United and Arsenal forward Danny Welbeck made sure of the victory with nine minutes to play, getting on the end flick-on from March, before dinking it over the head of Joe Gomez and firing home on the volley for his first league goal of the season.

Speaking after the game, Jurgen Klopp praised the performance of the hosts – who moved two points ahead of Liverpool in the table – before criticising his side’s organisation and belief.

“Bad. Really bad,” he told Match of the Day. “I can’t remember a worse game. It’s not difficult maybe. Brighton were the better team, it was well deserved. They played really well.

“They got more confident and we did the opposite. I can imagine they are very happy because it was a great performance and we made it too easy in too many moments.

“I had an idea to change the formation which was to try help the team. That was the idea. But we never did it properly. We were always a bit in between and that’s the worst thing you can do. We could have done better but we didn’t and that’s why I looked the way it did.

“We need to be creative with the options we have. What I saw today from my team was that they were not really convinced by it. That’s it.”

Klopp was asked what is going wrong for his side at the moment, and he said he felt they are doing ‘the two worst things’ possible in football.

“How can you explain that? The same players played outstanding football matches but if things aren’t properly organised then it can look like that.

“We were always a bit late and things like this. If you don’t win key challenges and lose the ball too easily they are the two worst things that can happen in football. There is no formation that can solve that.”

Asked if he was concerned, the German said: “Yeah, how can you not be after a game like this? I cannot stand here and say it didn’t happen. Of course, we have to be very concerned about it.”