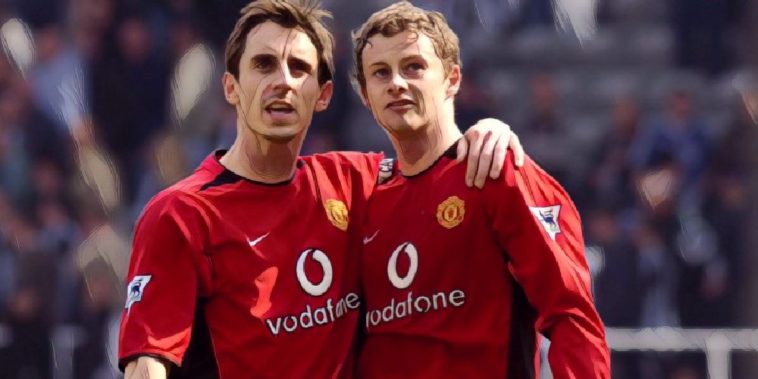 Gary Neville has recalled his first impressions of Ole Gunnar Solskjaer, admitting he thought the forward looked like a ‘competition winner’ upon his arrival at Manchester United.

Solskjaer joined Manchester United as an unheralded signing from Norwegian side Molde in 1996 before establishing himself as a legend at Old Trafford, scoring 126 goals in 366 appearances including that famous stoppage-time winner in the 1999 Champions League final.

The forward’s youthful looks and ruthless finishing ability saw him earn the nickname the ‘Baby-faced Assassin’ during his time in English football, though Neville admits Solskjaer’s unassuming appearance left him with a humorously underwhelming first impression of the new signing.

“I remember Ole walking into the changing room at the Cliff for the first time, in 1996, and he walks in with what I can only describe as a jumper from the 1970s in Yorkshire,” Neville said on the Sky Sports Off Script Podcast.

“Woollen, bobbly. I genuinely thought he was a competition winner from Norway. He looked about nine, he was so thin, and then after about a week in training we played a small-sided game, and he had this technique of being able to score in short spaces. He’d push the ball to the side and then stick it through your legs into the far corner. I thought: ‘He’s cleverer than he looks!’

“I remember Peter Schmeichel hated it when a goal went through your legs, and Ole would manage to do it. He was the biggest surprise for me. He was absolutely fantastic, and his technical ability was unbelievable.”