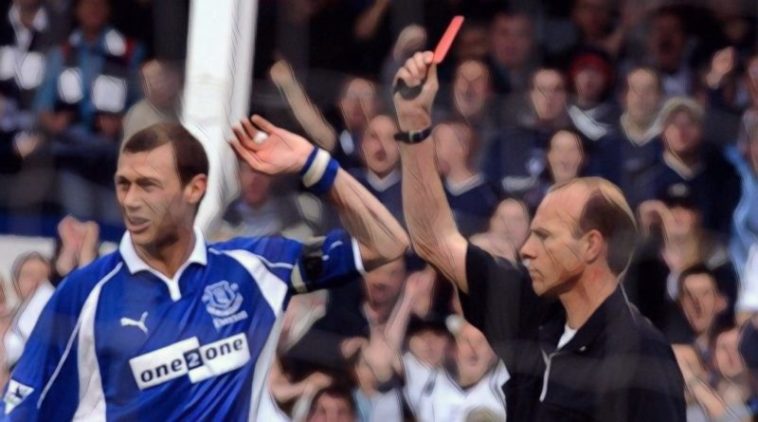 The Premier League prides itself on its competitive edge with English football’s top tier lauded for its physical nature, fans often reacting to a crunching challenge in the same manner as seeing their side score a goal.

There are, however, times when tensions boil over in elite level sport and the role of a referee can be a difficult one when it comes to brandishing cards to the game’s biggest stars.

Iconic players such as Roy Keane and Patrick Vieira are remembered among the players most familiar with the referee’s notebook, but which teams have seen the most number of players dismissed?

Here are the five clubs with the most red cards in Premier League history:

Perhaps a surprising inclusion on this list given Blackburn have spent a total of a decade outside of the top flight, including the past eight seasons in succession after suffering relegation from the Premier League in 2012.

Blackburn were, however, once amongst the leading sides in the division, one of just six teams to have won the Premier League title after the goals of Alan Shearer inspired Rovers to success in 1995.

The Lancashire side have received the fifth-most red cards in the history of the Premier League, with former Ewood Park favourite Tugay leading the way for Rovers for number of dismissals.

The former Turkey international was sent off on five occasions during his eight-year spell at Blackburn, contributing towards a total of 77 red cards for the club.

The five-time Premier League champions sit fourth on the list of Premier League red cards, the west Londoners having seen the referee brandish the red card on 78 occasions throughout the division’s history.

Leading the way for Chelsea is legendary captain John Terry, the former England defender having been sent off on six occasions during a 19-year career in the first-team at Stamford Bridge.

The Blues are also one of just eight clubs to have had two or more players sent off in the same fixture, seeing both Gary Cahill and Cesc Fabregas sent off during a defeat to Burnley in 2017.

Possessing the Premier League’s third-worst disciplinary record in terms of red cards is Newcastle United, who also hold the distinction of being the only top flight side to have received multiple red cards in the same fixture.

The Magpies are also the only team in Premier League history to have three players sent off in one game, a chastening afternoon at St James’ Park against Aston Villa in 2005 that saw teammates Kieron Dyer and Lee Bowyer dismissed for fighting each other in bizarre circumstances.

Steven Taylor had earlier been sent off for Newcastle for a handball, their hat-trick of dismissals contributing to a tally of 85 red cards.

Only one side has ever registered more Premier League red cards than Arsenal, the Gunners having hosted some of the division’s most notorious card magnets including former captain Vieira and current midfielder Granit Xhaka.

The aforementioned Vieira holds the joint-record for most red cards in the division’s history, the combative Frenchman having been sent off on a mammoth nine occasions during a nine-year spell in north London.

Martin Keown was also a notable contributor to Arsenal’s haul of 91 red cards, the former centre-back being sent off on six occasions for the club during the Premier League era.

The team with the most red cards in Premier League history is Everton, the Merseyside club having racked up a record 96 dismissals throughout their ever-present status in the division.

Notorious hot-head Duncan Ferguson is the player dismissed most often for the Toffees, the Scot receiving his marching orders a Premier League joint-record of eight occasions over two spells at Goodison Park.

Everton are also one half of the Premier League fixture that has seen the most red cards, the Merseyside derby with Liverpool producing the most dismissals in the league’s history.

Read – What if… every Premier League season of the 90’s finished on 13 March?

Read Also – What if… every Premier League season of the noughties finished on 13 March?