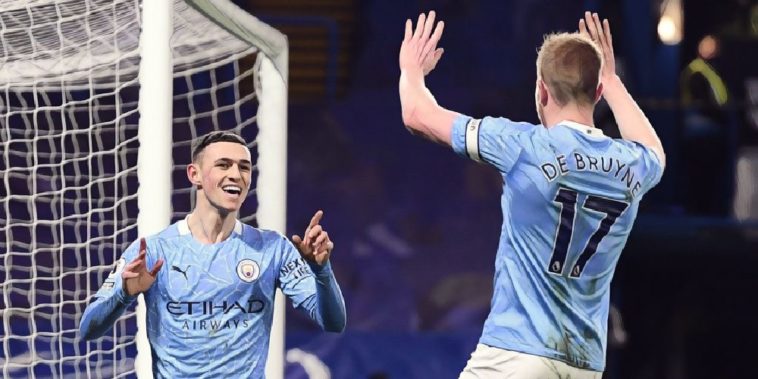 Chelsea and Manchester City meet in a powerhouse FA Cup semi-final clash on Saturday, the Premier League leaders still on course to claim what would be an unprecedented quadruple.

Here’s all you need to know about that encounter at Wembley:

After their shock 5-2 defeat to West Bromwich Albion in their first game after the international break, the Blues recovered with a superb 4-1 thrashing of Crystal Palace at the weekend, goals from Kai Havertz, Kurt Zouma and a brace from Christian Pulisic illustrating what they can do when at their free-flowing best.

Thomas Tuchel’s men went into that match off the back of an excellent 2-0 Champions League quarter-final, first-leg win over Porto, before seeing the tie out in the second leg in midweek, despite suffering a 1-0 defeat on the night after a stunning late overhead kick from Mehdi Taremi.

That 2-1 aggregate victory means that Chelsea have secured progression to the semi-final’s of Europe’s top tier competition for the first time since 2014, where they will play 13-time winners Real Madrid, the La Liga giants having seen off Liverpool in their quarter-final clash.

With Tuchel’s side now in two semi-final’s and still in with a shout of securing a top-four spot, it could well be a really enjoyable end to the season for the Blues, while a successful climax would also go someway towards vindicating the club’s decision to sack club legend Frank Lampard back in January.

As for team news ahead of that meeting with Pep Guardiola’s side, the Blues are set to be without midfield lynchpin Mateo Kovacic due to a muscle injury, although Andreas Christensen should be fit to return after sitting out Tuesday night’s loss.

City’s relatively smooth ride towards a seemingly inevitable third Premier League title triumph in four years hit a slight bump at the weekend, as they slipped to a surprise 2-1 defeat at the hands of a 10-man Leeds United side.

While Guardiola had made a host of changes in anticipation of their midweek clash with Borussia Dortmund, the former Barcelona boss was still able to put an extremely strong starting XI, yet they simply struggled to click into gear.

With Leeds losing captain Liam Cooper early on, it could looked as if the away side’s half-time lead would quickly dissipate amid a City onslaught, although it wasn’t until the 76th that the hosts did draw level, before Stuart Dallas snatched a shock victory in stoppage time.

Guardiola’s choice to rest some of his key men for that clash was vindicated in midweek, however, as City ran out 2-1 winners at the Westfalenstadion to claim a 4-2 aggregate victory over a spirited, young Dortmund side.

That triumph means that the league leaders are into their first Champions League semi-final since the 50-year-old took charge of the club back in 2016, with a hugely intriguing encounter with Paris Saint-Germain to come in the last four.

That result has also left open the possibility of a remarkable quadruple, with the clash at Stamford Bridge a chance to reach yet another domestic final under Guardiola. As for team news, the soon-to-be departing Sergio Aguero is the only real injury concern for Saturday’s game.

The two sides last meeting took place earlier this year, with Man City producing one of their best displays of the season, despite having been stricken by a coronavirus outbreak at the club’s training ground.

After a slow start, City took the lead through the in-form Ilkay Gundogan, before Phil Foden added a second with an excellent near-post finish just three minutes later.

That lead was then extended on 34 minutes as Kevin De Bruyne rounded off an excellent City breakaway to all but confirm the points before half-time, the hosts grabbing a very late consolation through Callum Hudson-Odoi.

That result was seemingly a real defining moment in both club’s seasons, with Chelsea’s shoddy display hastening the departure of manager Frank Lampard and the arrival of Thomas Tuchel, while it also served as something of a kickstart to City’s stuttering league form.

UK and Irish readers can watch the match on BBC One.