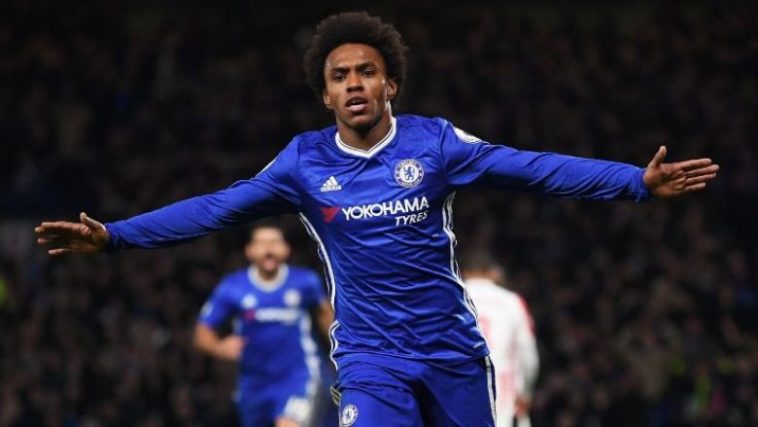 Chelsea are prepared to sell Brazilian winger Willian according to reports this morning.

The Daily Express claims that Antonio Conte is prepared to listen to offers for the 29-year old, who hasn’t quite replicated his impressive form of last season.

However this season under Antonio Conte, he last lost his starting place to Pedro and has been restricted to 13 Premier League starts, making a further 17 appearances from the bench, scoring seven goals.

Last seasons Chelsea boss Jose Mourinho is a huge admirer of Willian. When everyone else had seemed to have given up last season and turned their back on the Portuguese manager, Willian seemed to still give his all. This admiration for the player saw Willian be linked with a move to Manchester United last summer. Instead though, the Brazilian signed a contract extension to stay at Stamford Bridge.

However, after slipping down the pecking order this term, Willian is not expected to feature in Antonio Conte’s plans for next season. This could leave the door open for Manchester United, or indeed other clubs to sign the winger.

With three-years remaining on his current deal, Chelsea want to recoup as much of the £32million they paid back in 2013 That transfer to Chelsea was shrouded in controversy. Willian is believed to have agreed personal terms and had a medical with Chelsea’s rivals Tottenham Hotspur, before Jose Mourinho swooped late to steal his signature from under Spurs’ noses.

Should Chelsea keep Willian or is it time to move on? Would he fit into Manchester United’s squad? Leave us a comment below. If you are a keen or aspiring football writer and wish to write about Chelsea, join our writing team.

chelsea should hold on to the winger,Don’t sell him.