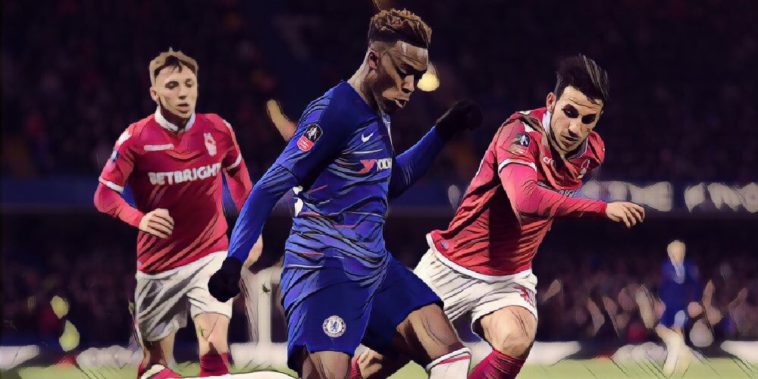 Maurizio Sarri has urged Callum Hudson-Odoi to stay at Chelsea and has said he is ready to challenge for a place in his first-team squad.

The youngster is one of the most highly rated players to come through the Blues Academy in a number of years, although like plenty more who have gone before him, has struggled to break into the first team.

He was given a rare opportunity to impress in Chelsea’s 2-0 FA Cup win over Nottingham Forest at the weekend, and he duly grabbed it with both hands, assisting both of Alvaro Morata’s goals.

The 18-year-old winger has been the subject of a big-money bid from Bundesliga champions Bayern Munich, who are looking to replace the ageing Franck Ribery and Arjen Robben, but Chelsea boss Maurizio Sarri has said that he is ‘ready’ to make an impact at Stamford Bridge.

“I think so, he’s ready,” Sarri said ahead of tomorrows Carabao Cup clash with Tottenham.

“Of course we have very important players in the same position, so do you want Willian or Pedro on the bench? I can play with only two wingers, three is difficult.

2 – Callum Hudson-Odoi is the first teenager to assist two goals in a single competitive fixture for Chelsea since Scott Sinclair versus Leicester in October 2007 (League Cup). Sparkling. pic.twitter.com/LBOVauSKwW

“But I think now he is ready. He can play but of course sometimes he will be on the bench, like Willian or Pedro, but now I can start to consider him at the same level.

“I know for me he is a very important player, he‘s young and now he’s improving, especially in the defensive phase. I think he played really well in the last match. He was in trouble in the game at Watford but only because he had a problem in his hamstring. I’m really very happy with him, I don’t know the situation with the club but for me he’s an important player.”

A number of talented young English players have flourished following moves to the Bundesliga, with Jadon Sancho the most standout name having swapped Man City for Borussia Dortmund. When asked if a move to the German top flight would be beneficial for Hudson-Odoi as well, Sarri insisted that he should stay with the Premier League side.

“I don’t think so because he’s an English player, he’s very young, he has the future and I think he has a very great future here, with the national team and Chelsea,” he replied.

“First of all I want good players. But we are lucky because our Academy is very good. It’s important because if you have five or six players from the academy you can have soul, more than when you have 25 foreign players.”