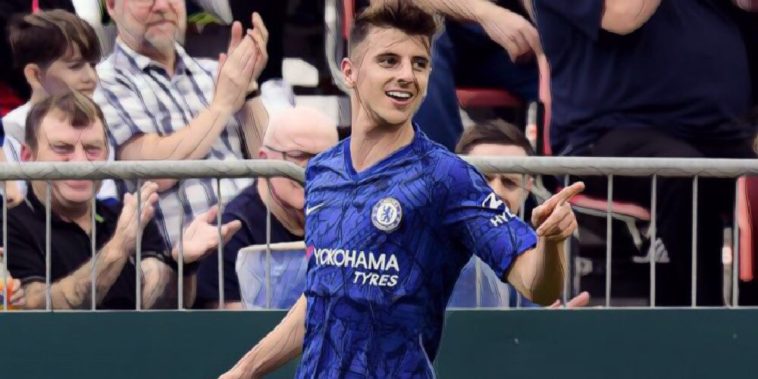 Mason Mount has discussed the influence of ‘role model’ Frank Lampard, with the highly-rated midfielder saying he is ‘learning off’ the Chelsea boss ‘every day’.

The England U21 international has impressed during the club’s pre-season tour, having been given his chance with the first-team at Chelsea under Lampard this summer.

Mount, who played under Lampard during his loan spell at Derby last season, has described the former England international as a ‘role model’ and says working under the 41-year-old is proving invaluable as he bids to make his breakthrough at Stamford Bridge this season.

“Being a midfielder and being at Chelsea you obviously look at him as a role model,” Mount told Sky Sports.

“For me working with him last year, and also this year, I have learnt so much from him.

“Speaking with him day in, day out I’ve been getting little stuff off his game, like him talking to me and telling me how to get into the box.

“I’m learning off him every day and it’s very exciting.

“You can see the group of players that we have is world class.

“For me coming into this team and working with them each day – I’m learning off them and that’s the best thing for me at the moment.

“It doesn’t matter how old you are, if you are ready and he thinks you are good enough then he’s going to put you in there.”

Speaking after Chelsea’s 1-0 defeat to Japanese side Kawasaki Frontale last week, Lampard confirmed that Mount would be a part of his first-team plans for next season.

“Mason’s part of the first-team squad this year and it’s time for him,” said Lampard.

“His qualities will improve even more with the qualities around him.

“Everyone knows the hopes I have for Mason and he showed today a glimmer early in pre-season of what we might see this year and going forward.”