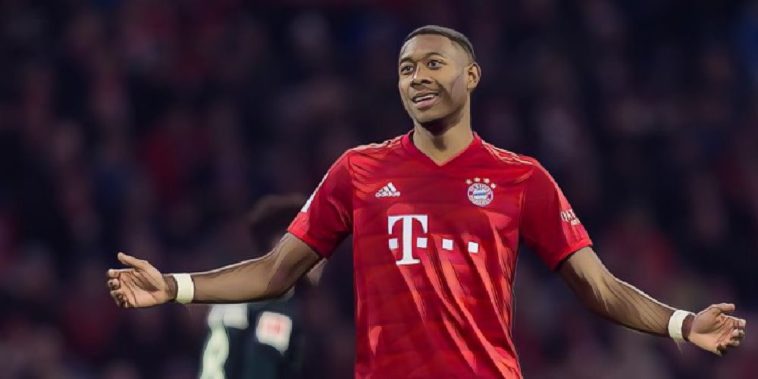 Chelsea are reportedly looking to swoop in for Real Madrid target David Alaba, the defender seemingly certain to leave Bayern Munich this summer.

The Austrian defender has enjoyed a remarkable 12 year spell in Germany, helping the club to nine Bundesliga titles while he also played a key role in the club’s two most recent Champions League triumphs, in 2013 and in last season’s competition.

The 28-year-old – who can play as a left-back, a centre-back and even a midfielder – has been integral to Bayern’s recent dominance, yet he appears to be nearing an exit, with the player entering into the final few months of his current deal, and Bayern unwilling to match his salary demands.

The prospect of signing a world class defender on a free transfer has alerted a number of Europe’s elite clubs, with La Liga giants Real Madrid seemingly favourites to pluck Alaba from Hansi Flick’s side.

However, according to the Guardian, Los Blancos may well have competition over his signature, with Chelsea ready to ‘hijack’ their move for the player.

The Blues had been linked with a move for a centre-back under previous boss Frank Lampard and the arrival of new manager Thomas Tuchel has not changed that, with the German keen to bolster his new defence.

The club already have a number of centre-back options, including Thiago Silva, Antonio Rudiger, Andreas Christensen and Kurt Zouma, as well as Fikayo Tomori and Malang Sarr who are both currently out on-loan, yet recent struggles have perhaps highlighted the need for a new top-class defender.

There is also the fact that at 36, first-choice centre-back Silva is only really a short-term option, with the club in need of a younger, more long-term addition.

While Alaba would appear to be top of that list, the likes of RB Leipzig’s Dayot Upamecano and Bayern’s Niklas Sule have also been linked with a move to Stamford Bridge.

See also – Top of the Pops: Counting down 10 of our favourite 90’s PL goals