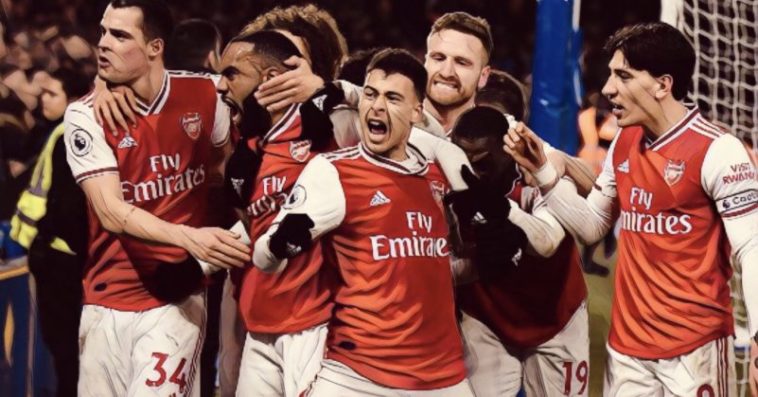 Chelsea and Arsenal played out an entertaining and eventful London derby with honours even at Stamford Bridge on Tuesday night.

Chelsea will be the more disappointed as they failed to open up an eight point gap between themselves and fifth-place Manchester United. Tonight’s game was low on quality for large parts but had plenty of talking points with red cards, penalties, and late goals to keep the fans on their toes.

Here is a look at how the players rated…

Guilty of a sloppy kick out early on which lead to a corner and looked shaky as the game opened up. Nothing he could do from a one-on-one, but may feel he could have got a hand out faster to tip Bellerin’s late equaliser past the post.

The Spaniard didn’t have too much defending to do on the night against ten men. He got forward with gusto, linking up well with the attackers and was razor-sharp to Hudson-Odoi’s whipped ball as he poked home Chelsea’s late second goal.

Didn’t do too much wrong but will feel he could have offered a bit more conviction at the back as the hosts looked nervy out of possession despite their numerical advantage.

Like Christensen, did nothing wrong really, but his distribution was poor at times as Chelsea struggled to build from the back and break down a stubborn and organised low block.

Got forward and looked up for a battle. Picked up a sloppy yellow for a niggly kick out on Pepe in the first half but he faded towards the end and was too easily beaten by a knackered Bellerin in the build-up to Arsenal’s second goal.

Neat, tidy on the ball but lacking in creativity. Slipped to allow Martinelli in on goal for the equalizer.

Coolly slotted home from 12 yards to give Chelsea the lead. Quiet night other than that silky penalty, but he should have got out to Bellerin and tried a bit harder to stop the shot from the Spaniard.

Like Kante, not terrible, but only recycled the ball in the second half when Chelsea’s midfield really needed to press home their advantage. Hooked for Barkley with 25 minutes to play.

Terrifying pace down the right and some nice footwork to go with it. Guilty though of a few errors on the ball and wasteful over-playing at times, but swung a lovely ball in for Azpilicueta’s goal.

Directed a free header straight at Leno in the first half before winning the penalty for the home side. A willing runner but struggled to get on the end of anything for the remainder of the game.

A Poor night from the Brazilian. He lacked his usual creative spark and a lot of his passes were either easily cut out or miserably predictable. Hooked with ten minutes still to play.

Came on with plenty of time, but wasted a few good positions, with a couple of poor diagonal passes.

Did okay off the bench one poor snapshot aside. Forced a good save from Leno with a clever header late on.

Put himself about in the box but offered little else off the bench.

Could do nothing about either goal. Made a couple of decent saves in either half but was largely untroubled considering the home side’s numeric advantage.

Playing his first match since November, Bellerin was solid defensively for Arsenal especially as Pepe offered him no cover all night. Hit home a deserved equaliser late on with a smart, curling finish in front of the traveling Arsenal fans.

The most horrible of horrible back passes from Mustafi to Leno saw Abraham played in on goal and round the keeper in the box in the build-up to the penalty and red card for Luiz. He made up for it with some decent blocks and brave defending in the second half though.

Sent off on his return to Stamford Bridge after denying Abraham a clear goal scoring opportunity. A dire night for the Brazilian.

A very hard-working shift from the youngster on a tough night for the away side. Visibly tired towards the end but Arsenal fans should be encouraged by a much more solid and disciplined display from the academy graduate.

Did well to restore some calm to Arsenal’s midfield after a poor start. A neat and tidy presence in the centre of the park for the away side.

A stand-in centre back for most of the game; Xhaka put in one of his best displays of the season as he defended with real quality and guts. Cut out ball after ball and lifted the players around him.

A sloppy display from the Ivorian at Stamford Bridge. Some passes went astray and he looked disinterested in covering for Bellerin at full-back.

Awful, anonymous showing from the German. He was nowhere to be seen once again and was hooked on 55 minutes. Arsenal improved markedly once he came off and that’s now just one assist and zero goals in the former Real Madrid man’s last 13 Premier League games.

Composed and ready to finish with ice-cold efficiency when he got his chance. The youngster’s finish past Kepa after a lengthy run on the counter was very tidy indeed as the Brazilian showed once again that he has the raw materials to make it big on this stage.

A tough night for the Frenchman as he was largely starved of decent service. Put in one hell of a shift though which will keep his manager happy despite another game without a goal.

The Frenchman was excellent off the bench as he launched into tackles and added some impetus to Arsenal’s previously lifeless midfield.