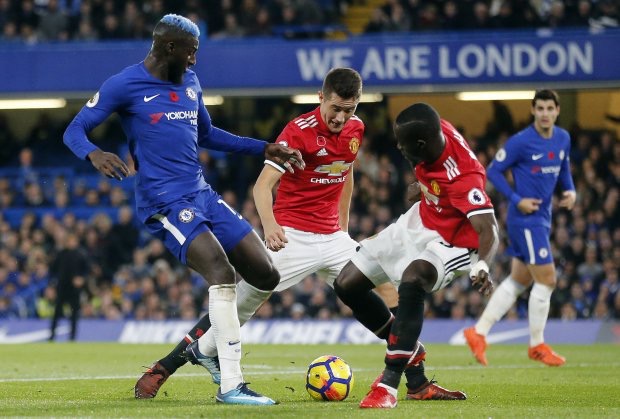 Álvaro Morata’s goal in the 55th minute proved to be the decider as Chelsea defeat Manchester United 1-0 at Stamford Bridge on Sunday.

The heavyweight tilt between the two powerhouse clubs did not disappoint. Fireworks were flying leading up to this match on Guy Fawkes Night, and they provided tons of action and entertainment for fans and neutrals alike. Chelsea’s win over United put them within one point of each other in the Premier League table.

Here are five things we learned from Chelsea’s win over United on Sunday.

Chelsea and United faced off in a battle during the offseason as they fought to get the signatures of transfer targets in the summer. This marked the first day the new players faced off against each other to determine a so-called ‘winner’ of the transfer window. In the end, it doesn’t matter if you’re not in first, but it’s a chance to one-up a rival and gain bragging rights.

The biggest of these matchups would be between Romelu Lukaku and Álvaro Morata. The Belgian was rumoured to return to Chelsea in the summer, but snubbed them for a major money move to the red side of Manchester. The Spaniard shares a similar story, but chose the Blues over the Red Devils. Both brought hype and supreme goal-scoring abilities to their new clubs. It was only a matter of time before they faced off to prove which club got the better deal.

Morata scored a header in the second half, but missed a few chances to put the game to bed. Lukaku, on the other hand, was missing throughout the match. He didn’t get any service from his teammates, and was unable to make an impact for his team.

This match alone won’t decide which striker is better, but many eyes were watching today. Morata was better today, but there’s still a lot left in the season, and Lukaku has shown his quality in the past. He’ll continue to do so in the future.

Chelsea’s 2014/15 season gave birth to a goal-scoring partnership between Spaniards Cesc Fàbregas and Diego Costa. The magic midfielder would provide the perfect pass for the bulldozer of a forward to finish. Costa finished that year with 20 goals in the Premier League, enough for third behind Sergio Agüero and Harry Kane.

Those days are long gone. Costa has left the club for Atlético Madrid, and the form of Fàbregas has been on and off. I suppose all good things must come to an end.

However, a new Spanish duo was formed during this season, this time between new striker Morata, and the unlikely César Azpilicueta. Azpilicueta has played in many positions in past Chelsea lineups, and he was known for defensive prowess, but he never showed his goal-assisting ability until now. Many goals for Chelsea this season have been Morata headers from Azpilicueta early crosses.

Chelsea would hope for this to continue for the rest of the season. Besides, Eden Hazard, there aren’t many Blues with an eye for goal (I’m looking directly at Tiémoué Bakayoko while longing for a younger Frank Lampard to come back).

We missed you, Kanté

Chelsea haven’t controlled a game since defeating Atlético Madrid away in the Champions League on September 27. Shortly after, N’Golo Kanté suffered an injury, leaving a crater in the midfield to be filled by Fàbregas and Bakayoko.

The form of the midfield suffered when Chelsea lost the player that covered the most space. Teams exploited the weaknesses of Chelsea by deploying a press to pressure the Blues into mistakes in their own end.

As we predicted before the game, Chelsea would have struggled to win the game without the Frenchman, as this is how it turned out.

Kanté makes all of his teammates into better players. His return was just in time as Chelsea faced tough competition against Manchester United. Without Kanté, the midfield would have been dominated by Red Devils. Instead, Nemanja Matic, Ander Herrera, and Henrikh Mkhitaryan were stifled, forcing a change by Mourinho to introduce Marouane Fellaini.

The Frenchman was sorely missed while he was out with injury, and his return helped Chelsea to keep up with the rest of the table.

No David Luiz, no problem

In such a big match, you would expect Chelsea to start their veteran players who have experience in such a big match like this. The starting lineups were shocking when it was announced that David Luiz didn’t even make the bench for the Blues, with Andreas Christensen taking his place in the back line.

What’s even more shocking was that Antonio Conte stated this was not an injury move, but a tactical decision. Rumours were flying around that Luiz was benched after not seeing eye-to-eye with his manager on recent results.

Christensen has played well in the appearances he’s made this season, and Conte has finally shown faith in the youngster in one of the biggest matches of the season. He proved his worth by shutting down Lukaku and the United attack.

The Danish centre-back is the future of Chelsea. David Luiz will still be vital for the rest of the season, but Christensen will be a strong option for future lineups who deserves a regular starting spot.

Mourinho’s last 10 away games against the top six of the Premier League have been bleak. The record is five draws, five losses, and only one goal scored. This includes three matches as manager of Chelsea, and seven for United.

The Portuguese manager has been known for his pragmatic approach, and careful playstyle against the best opposition. His teams do their best to ensure no goals are conceded by them. He sacrifices attack for defence, which didn’t work against Chelsea on Sunday.

United need to be gaining three points from the big matches in order to catch up to their Manchester neighbours. City are currently running away with the title, and no team can afford to make a mistake and expect the Citizens to do the same.

Draws won’t be enough for United or Chelsea. If anyone wants a hope of passing City in the table, clubs need to start playing to win instead of playing to not lose. Otherwise, Pep Guardiola and company will easily bring the Premier League trophy to Etihad Stadium.