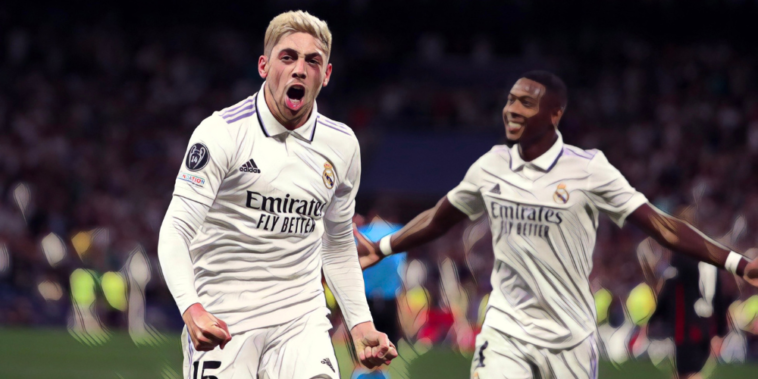 The UEFA Champions League’s group stages are heating up following the second round of fixtures and once again, we’ve delved through the midweek action to compile our Team of the Week.

Manchester City and Liverpool left it late to secure crucial home wins, with Erling Haaland haunting his former side as City came from behind to beat Borussia Dortmund at the Etihad.

Graham Potter’s first game in charge of Chelsea ended in a draw with Red Bull Salzburg, while Spurs suffered a setback after losing at Sporting Lisbon.

Recalled to the Rangers side, the veteran goalkeeper could hardly have done more to keep his side in the contest against Napoli.

McGregor, who became the fifth oldest player in Champions League history at 40 years and 226 days, kept Rangers in the game at 0-0 and made two penalty saves from Piotr Zieliński after the midfielder’s initial effort was ordered to be retaken. McGregor guessed right again and almost got a hand to a third penalty as Matteo Politano’s spot-kick just evaded his dive.

Napoli’s class ultimately ended in a win at Ibrox, but the 3-0 scoreline was harsh on McGregor who really needed more help from his defence.

Denzel Dumfries was back to his best as Inter Milan’s campaign got up and running with a 2-0 win at Viktoria Plzen.

The Dutch wing-back was a marauding presence down the right flank for Inter and scored his side’s second goal, after bursting into the box to fire home from Edin Dzeko’s pass.

It was the highlight of an all-action performance from Dumfries, one which saw him provide seven crosses, complete two take-ons and win 7/9 duels.

Dayot Upamecano was given the task of stopping Robert Lewandowski on his return to Bayern Munich and did so in impressive fashion with a dominant defensive performance.

The France international has had his critics since joining Bayern from RB Leipzig in 2021, but produced a performance which demonstrated why the centre-back was among Europe’s most sought-after talents.

Upamecano made five interceptions and six clearances in a solid showing, as Lewandowski departed his former stomping ground without a goal and on the wrong end of a 2-0 defeat.

With Julian Nagelsmann’s side in need of a result, Upamecano stood strong against a familiar but formidable opponent.

Red Bull Salzburg reached the knockout stages last season and are competing once again for progress this time around, holding Chelsea at Stamford Bridge after an opening draw with AC Milan.

Salzburg frustrated the 2021 winners in west London, with centre-back Pavlovic an immense presence at centre-back. The 21-year-old signed for Salzburg during the summer after failing to break through at Monaco and already looks at home at a club renowned for nurturing young talent.

He made a good block on Kai Havertz early on, before an even better intervention to thwart Pierre-Emerick Aubameyang before the break. The Serbian is raw, but has all the attributes – aggressive in his defending and composed in possession – to reach a higher level.

That Andy Robertson’s absence is not felt nearly as much as it once was is perhaps the greatest testament to Kostas Tsimikas’ improvement at Liverpool.

The Greek international found himself in the starting side against Ajax and was crucial to the Reds’ late win at Anfield, with a performance full of tenacity and dangerous deliveries from the left flank.

📊 Kostas Tsimikas created 5 chances tonight, assisting Joel Matip's winner. It's the most he's created in a single match for Liverpool. He's averaging an assist every 74 mins this season, and every 240 mins in his Liverpool career. #lfc [opta] pic.twitter.com/iRgh8PYCMZ

Tsimikas created a game-leading five chances against the Dutch side and provided the assist for Joel Matip’s late winner. He has now recorded three assists in all competitions this season – averaging an assist every 74 minutes – and perhaps deserves an extended run in the side as Robertson looks to regain his form.

Benfica moved into pole position for qualification after coming from behind to win at Juventus, with last season’s quarter-finalists securing back-to-back group stage wins.

At the centre of their win in Turin was the performance of Enzo Fernandez, who is fast emerging as a bargain signing during his first months in European football. The 21-year-old was reportedly tracked by the likes of Manchester City and Manchester United before leaving River Plate during the summer and the midfielder has made an instant impact in Lisbon.

Against Juventus he produced one of the most accomplished performances of his career to date, leading the clash for touches (92), ball recoveries (12), duels won (12) and dribbles completed (3).

On current form, he will be pushing for a prominent part in Lionel Scaloni’s World Cup plans.

Increasingly influential and fast becoming undroppable for Real Madrid, Federico Valverde began the game from the right-hand side and underlined his growing influence to the Spanish champions.

Valverde, as ever, was full of hard running and stepped up when Real Madrid needed him most with the game’s opening goal. The Uruguayan checked inside to fire in a low finish from the edge of the area, as Leipzig threatened to frustrate the holders at the Bernabeu.

Valverde needs to be talked about more 😤

The 24-year-old is a Swiss Army Knife of a footballer for Carlo Ancelotti and one improving his composure and quality in the final third. Impacting games at both ends of the pitch, Valverde is a manager’s dream.

Bayern Munich needed a strong second-half performance to beat Barcelona 2-0 in Matchday 2, as the Bundesliga champions continued their impressive recent record against this week’s opponents.

Barcelona had the better of the opening exchanges, but an improvement from the hosts – led by the brilliant Jamal Musiala – ensured back-to-back wins for Bayern.

The teenager continued to underline his status as one of world football’s best young players, leading the contest for chances created (5), passes into the final third (22) and possession won in the final third (3).

Jamal Musiala for Bayern vs Barcelona:

At times. Musiala ran this game, and at 19, he is already beginning to run a side as impressive as Bayern. That the effervescent midfielder – who has six goals in nine games already this season – was allowed to slip through the net for both Chelsea and England is a decision each will regret.

PSG were made to work for their win at Maccabi Haifa as the Israeli side took the lead and proved stubborn opposition.

It took PSG’s star trio to come to the fore to turn the game around, as Lionel Messi, Kylian Mbappe and Neymar all found themselves on the same scoresheet in a Champions League fixture for the first time.

Messi’s goal saw him become the first player to score in 18 consecutive Champions League campaigns, while he has now scored against 39 different opponents – breaking Cristiano Ronaldo’s record – from 19 different nations.

Lionel Messi has now scored against 39 different clubs in the Champions League, more than any other player 🐐 pic.twitter.com/ijNRpmoGcd

He followed his goal with a nonchalant defence-splitting pass to tee up Mbappe, the sort of weighted pass that we have become accustomed to from Messi but one from the very top drawer.

Marcus Edwards proved a point to his former side with a scintillating showing against Tottenham, as the club’s academy product tormented the north Londoners in Lisbon.

Edwards produced an electric performance which included five completed dribbles in the first half alone, including one solo run that almost resulted in a brilliant individual goal.

The 23-year-old left Spurs in search of regular first-team football in 2019 and signed for Sporting following an impressive spell at Primeira Liga rivals Vitória. He has scored three goals in six games so far this season and shone on his full Champions League debut, with the sort of showing that will no doubt attract Premier League interest.

Club Brugge produced arguably the result of Matchday 2 as the Belgian side thrashed Porto 4-0 at the Estádio do Dragão. Having upset Bayer Leverkusen in their Champions League opener, Brugge proved they are genuine contenders to reach the knockout rounds after an emphatic win in Portugal.

Ferran Jutglà was at the heart of a ruthless performance from the visitors, with the Spanish striker continuing his impressive start to the season with a goal and assist. The 23-year-old was signed from Barcelona for a fee of €5m during the summer and has hit the ground running, having scored six goals and provided four assists in just nine starts for Brugge.

What an incredible night yesterday!
This is the way we have to go.
Come on @clubbrugge 🖤💙 pic.twitter.com/CjHQ7FHUdB

The likes of Charles De Ketelaere (€32M), Odilon Kossounou (€23M) and Arnaut Danjuma (€16.5M) are among the high-profile names to have left Brugge for huge profit in recent windows and there will be European clubs monitoring their team this season if results and performances continue.