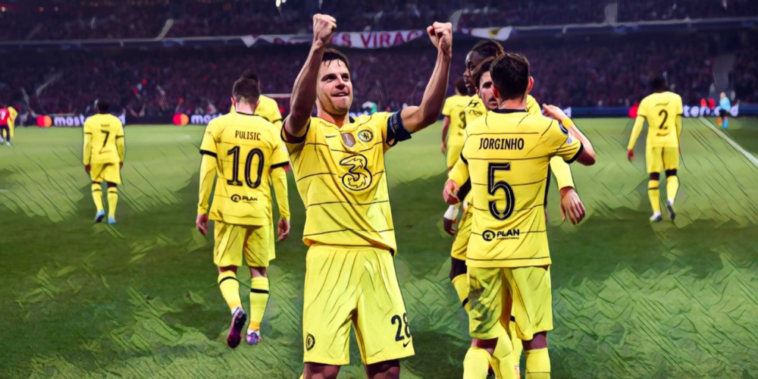 The UEFA Champions League’s last eight has been finalised after the completion of the last-16 ties, this week’s action having provided no shortage of upsets and surprises.

Chelsea became the third Premier League team to reach the quarter-finals after winning in Lille, but it was misery for Manchester United who crashed out after a disappointing defeat to Atletico Madrid.

Elsewhere there were impressive away wins for Benfica and Villarreal, who will enter the quarter-finals as underdogs after upsets of Ajax and Juventus respectively.

Following the midweek action we’ve compiled an XI of the leading performers, here is our Champions League Team of the Week.

Jan Oblak has fallen below his usual exceptional standard this season, but the Slovenian shot-stopper saved one of his best performances of the campaign for Atletico Madrid’s 1-0 win at Manchester United.

Oblak made five saves with three coming from inside the box, including blocking a close-range Anthony Elanga effort with his face before reacting brilliantly to keep out Raphael Varane’s goal-bound header.

A stunning save in both halves from Jan Oblak this evening! 🧤🔥#UCL pic.twitter.com/5eFh0tBJTX

The 29-year-old also made four high claims to relieve the pressure on the Spanish side, his clean sheet ensuring Diego Simeone’s side will take their place in the last eight.

An honourable mention must go to Geronimo Rulli, arguably Villarreal’s best performer as the La Liga side won 3-0 at Juventus to reach the quarter-finals.

Azpilicueta was back in the side at right-back and making his 463rd appearance in Chelsea colours, his consistency such that it’s difficult to think of too many poor performances from the long-serving Spaniard.

Azpilicueta enjoyed a game of two halves against Lille, defending well during the opening period as the Ligue 1 side pushed to get back into the contest, before providing more forward threat in the second as Chelsea sealed their place in the quarter-finals.

Together into the next round!! That’s the spirit!!💪🏻💙 #UCL pic.twitter.com/fO9JvIb6rZ

A captain’s performance was capped with the winning goal, as the defender arrived at the back post to turn in Mason Mount’s cross and seal the holder’s progress.

Villarreal ran riot in the closing stages to secure a 3-0 win at Juventus, weathering the early storm from the Italian side before producing a clinical showing to move into the last eight.

Pau Torres produced an excellent individual performance for the Spaniards, ending the game with four tackles and six clearances to ensure a clean sheet for Unai Emery’s side.

It’s easy to see why the centre-back has been courted across the continent by leading sides and he capped a strong showing with the crucial second goal, bundling in from close range as the Europa League holders became the third Spanish side in the last eight.

Benfica upset the odds to reach the quarter-finals after winning 1-0 at Ajax, edging a close contest in Amsterdam after an entertaining affair in the first meeting between the sides.

It was two familiar faces to Premier League fans who held firm amid the home side’s pressure, with Nicolas Otamendi and Jan Vertonghen producing commanding performances at centre-back.

Vertonghen used all his experience against his former side as Benfica earned a hard-fought win, ensuring the prolific Sebastien Haller was held goalless for the first time in the Champions League this season.

Impressive again after a stand-out showing in the first leg in which he created Atletico Madrid’s goal, Lodi took his turn as scorer in the return after heading home Antoine Griezmann’s cross at the back-post.

The Brazilian’s best comes when given room to venture forward and he gave Diogo Dalot a torrid time, with Lodi having given Diego Simeone a selection headache ahead of Yannick Carrasco’s return from suspension.

Fred has had his fair share of criticism across four seasons at Manchester United, but the midfielder is enjoying one of his better spells with the Red Devils and was his side’s stand-out performer despite a disappointing defeat against Atletico Madrid.

The 29-year-old started brightly against Atletico with his energy and tenacity important to the press, whilst there was a showreel of skills associated with Brazilians – though not often Fred – including an outrageous trick to embarrass Stefan Savic.

He faded, alongside his side’s hopes of Champions League progress, in the latter stages, but this was another encouraging performance from a player who could still have a role to fulfil at Old Trafford.

The experienced centre-piece of the Villarreal side, Parejo ensured his side kept ticking over and remained in the game at Juventus.

Parejo covered the ground and was assured in possession for Unai Emery’s side, as Villarreal soaked up the home side’s challenge before launching a late triple-salvo to move into the quarter-finals.

Emery – a record four-time Europa League winner – has mastered the art of two-legged European football and Villarreal will head into the quarter-finals with ambitions of upsetting the Champions League’s elite.

Griezmann’s dogged defensive tenacity might not be the first trait that comes to mind when discussing the French forward, but there’s a reason the 30-year-old has played 281 games as part of Diego Simeone’s Atletico Madrid machine.

Griezmann was tireless in his work as the Spanish side won 1-0 at Manchester United, dropping deep to hassle the Red Devils’ midfield and apply pressure.

He created the game’s only goal with a floated cross into Renan Lodi, before showing his selflessness and willingness to work in the second half with a spell in the unfamiliar surroundings of right wing-back.

Christian Pulisic’s goal helped turn the tide for Chelsea at Lille, as the US international broke forward to level with a fine finish in France.

It was a moment of real quality from Pulisic and took his haul to six goals for the campaign in all competitions, levelling his haul from the entire of the 2020/21 season.

His goal also saw him become the highest-scoring American in UCL history, in addition to matching the goal record of former Chelsea favourite Eden Hazard in the competition.

Chelsea have their two-goal lead back! 🙌

A stunning pass from Jorginho allows Christian Pulisic to slot the ball home just before the break 🔥#UCL pic.twitter.com/aE1LNOq1di

The 23-year-old has had his frustrations across the past two seasons, but Chelsea will now hope to coax his match-winning best on a more consistent basis.

Darwin Nunez’s 26th goal of the season might just have been his most important, heading home a crucial winner as Benfica dumped out Ajax.

The Uruguayan – a transfer target for West Ham during the January transfer window – continued his excellent campaign with the Portuguese side after heading home the only goal of the game in Amsterdam.

The 22-year-old’s involvement had been limited until that point as he ran himself into the ground with little reward, though his persistence was eventually repaid with the tie’s decisive moment.