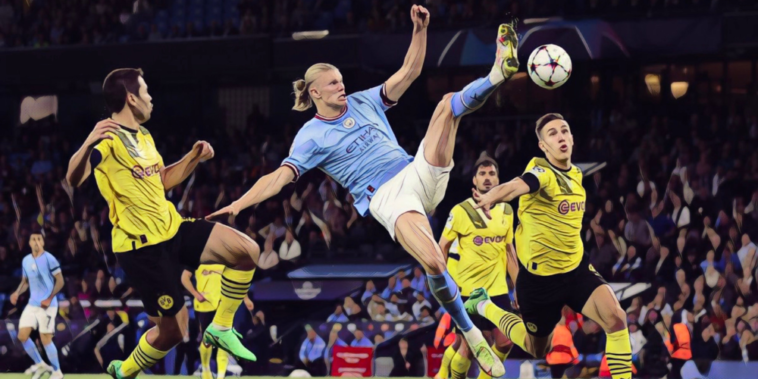 There was a collective sigh of relief around Anfield at the full-time whistle on Tuesday, as Liverpool left it late to rescue a win over Ajax.

Having been thrashed 4-1 at Napoli in their group stage opener, Liverpool were in danger of falling behind both the Italian side and Ajax in the race for qualification.

Jurgen Klopp’s team dominated the contest, but looked set for an evening of frustration with the scores level headed into the final minutes. The breakthrough came from an unlikely source on 89 minutes, as Joel Matip rose to head home Kostas Tsimikas’ corner in front of the Kop.

Joël Matip powers home a header and the Reds are minutes away from a vital win 🙏#UCL pic.twitter.com/IgHjmy2FH3

Liverpool had dominated in the air with Virgil van Dijk and Matip winning 15 of their combined 17 aerial duels against Ajax, while the centre-back duo had seven of Liverpool’s 24 shots on goal. Crucially, Matip’s final effort found the target and the Reds’ European campaign is up and running.

Jamal Musiala has evolved into one of world football’s best young talents since leaving the Premier League, with the teenager already cemented as a key cog in Bayern Munich’s brilliant midfield.

Musiala was outstanding as the Bundesliga champions beat Barcelona 2-0 at the Allianz Arena, causing countless problems with his off-the-ball movement and dribbling through central areas.

Jamal Musiala is having a breakout season ⭐️ pic.twitter.com/w2L1IO51NH

Bayern required second-half improvement to continue their recent dominance over Barcelona and Musiala was at the centre of their win, leading the clash for passes in the final third (22), touches in the opposition box (8), chances created (5), and possession won in the final third (3).

The 19-year-old provided an assist for Leroy Sane and now leads Bayern’s assist chart alongside Thomas Muller, Kingsley Coman and Sane this season, while his six goals in nine games make the midfielder the Bavarian’s leading scorer.

Having been allowed to leave Chelsea for just £180,000 in 2019, his exit is shaping as a huge regret for a club who have already cursed the premature exits of players including Kevin De Bruyne and Mohamed Salah.

Manchester City were ordinary for much of the opening 80 minutes against Borussia Dortmund, as the Premier League champions failed to register a single shot on target.

John Stones’ effort from distance – with a little help from some questionable goalkeeping – brought the sides level after Jude Bellingham’s opener, before Erling Haaland haunted his former team with an incredible improvised winner.

Joao Cancelo – whose assist on its own was special enough – provided the service with an outrageous outside-of-the-boot cross, one which Haaland converted with a showing of acrobatic technique and control.

A ridiculous assist from Cancelo, an even more ridiculous finish from Erling Haaland 😍

It’s now 26 goals in 21 Champions League games for Haaland, who has failed to score against just two opponents he has faced in the competition. The boy’s a freak.

Performance of the Week

Few gave the Belgian champions much chance of progress to the knockout rounds, but Brugge are on course to upset the odds after successive group stage wins.

After a hard-fought 1-0 win over Bayer Leverkusen in their opening fixture, Brugge sent out a statement of intent with a 4-0 thrashing of Porto in Portugal.

So far so good for Carl Hoefkens and his fearless young side, with a double-header against Atletico Madrid up next as Brugge look to continue their underdog story. Brugge – who finished as European Cup runners-up in 1978 – have not reached the knockout rounds in the Champions League era.

The Champions League is just one big playground to Erling Haaland, isn’t it?

Jude Bellingham continues to impress in the colours of Borussia Dortmund, with the midfielder opening the scoring during Dortmund’s 2-1 loss at Manchester City.

Bellingham has now scored more Champions League goals as a teenager (4) than any English player and a former Three Lions’ great believes the 19-year-old has similarities to an ex-England captain.

I’ll be very surprised if @BellinghamJude doesn’t play a big part in @England’s World Cup campaign. Got a bit of Bryan Robson about him.

Just what is going wrong for Son Heung-Min?

The South Korean is without a goal in eight appearances in all competitions this season and was again ineffective as Tottenham crashed to a 2-0 defeat at Sporting Lisbon.

Son has set high standards in recent campaigns and won a share of the Premier League’s Golden Boot last season, but he has looked out of sorts across the campaign’s opening weeks with both his sharpness and endeavour down.

😳 Son Heung-Min has now had 19 shots without scoring for Tottenham in all competitions this season. He's only hit the target with seven of them. pic.twitter.com/TaL9o3lfCm

Unable to impact the game as Spurs lost in Lisbon, he cut a dejected figure upon his substitution for Dejan Kulusevski with 18 minutes remaining. It was once considered unthinkable to leave Son out of the side, but the form of the forward – alongside impressive performances from Richarlison and Kulusevski – mean it is something Antonio Conte must consider.