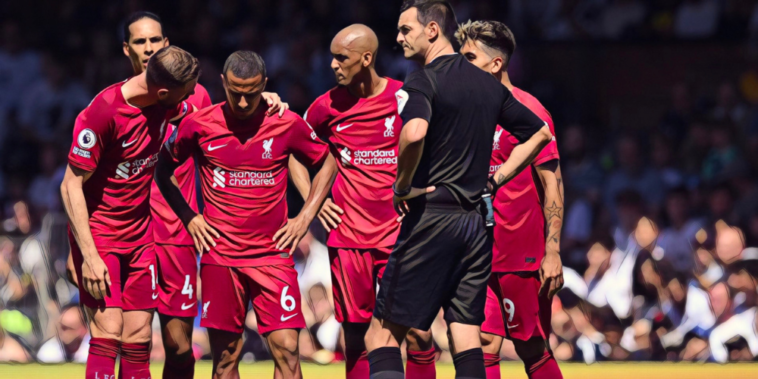 Jamie Carragher believes Liverpool need a refresh in midfield but has urged the club to not ‘panic’ if the right player is not available this summer.

Liverpool began the season with a disappointing 2-2 draw at Fulham on Saturday lunchtime, with a poor performance worsened following an injury to Thiago Alcantara.

The Spain international is expected to miss six weeks with a hamstring issue and his absence leaves the Reds light in midfield, with both Alex Oxlade-Chamberlain and Naby Keita having also missed the season opener in west London.

Liverpool have been linked with the likes of Jude Bellingham and Marcelo Brozovic this summer, but Carragher believes his former side should only enter the market if the ‘midfielder they want’ becomes available.

“Most people would say Liverpool’s midfield could now be strengthened, not in terms of numbers but maybe in terms of quality and offering something different to what they have in midfield,” Carragher told Sky Sports.

“It’s not having a go at the midfield players that they currently have, it’s just the age profile of some of the midfielder there, who are getting into their 30s. Liverpool’s first-choice midfield – and the one that played at Fulham – is getting towards the 30-age mark. You think a younger and more energetic player at some stage is needed, they’ve got those players there in reserve but they’re all injured.

“I would only want Jurgen Klopp and Liverpool to do that if they get the midfielder they want. Liverpool’s success in the transfer market has been down to not panicking, it’s not what they’ve done in the past, it’s not what they’re doing now and it can’t be what they do in the future. If there’s no midfielder they want out there, don’t get him. But if they feel there’s one who has those quality and is available, I would like them to do it of course. But don’t panic.

“That’s the way Liverpool assess things in the transfer market. If you think about the deal with Virgil van Dijk, that deal fell through in the summer and they waited until January. They didn’t get another centre-back – and they did need one – but they waited for the guy that they wanted. That proved very successful and that’s what they’ll do in midfield.”