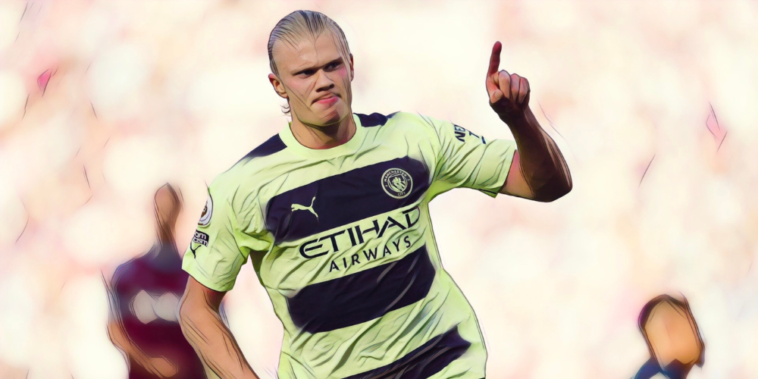 The Premier League is back with the opening weekend having failed to disappoint. As always, each week we delve through the weekend action and compile our divisional Team of the Week, with this our first XI of the 2022/23 campaign.

It was a dream start for Erling Haaland at Manchester City as the summer signing proved the match-winner at West Ham, though last season’s runners-up Liverpool made a stuttering start at Fulham.

Erik ten Hag will also now be well aware of the task facing him at Manchester United as the Dutchman’s reign began with a disappointing defeat to Brighton.

Following the first fixtures of the season we’ve compiled a best XI from the stand-out performers, here is The Football Faithful’s Premier League Team of the Week.

Mikel Arteta praised the performance of Aaron Ramsdale as ‘exceptional’ as Arsenal began the new season with a 2-0 win at Crystal Palace.

After a nightmare start at Brentford last season, this was a performance which showcased the improvement of the Gunners across the past 12 months with Ramsdale impressing as the last line of defence.

The England international overcame some nervous early moments to produce a string of saves, including excellent stops to frustrate both Odsonne Edouard and Eberechi Eze. Ramsdale’s showing ended a long wait for a clean sheet, securing his first shut-out in 11 competitive fixtures.

After being beaten far too easily in the build-up to Southampton’s opener, the right-back recovered to have a major influence on the game going forward.

Emerson was heavily involved in the action as Spurs came from behind to win 4-1 against the Saints, with the Brazilian forcing the north London side’s third goal with a low cross that Mohammed Salisu could only slice into his own goal.

💪 When the hustle pays off

The right-back then raided forward again to tee up Dejan Kulusevski for the fourth, with the Swede bending home a fine finish following Emerson’s cut-back into space.

After three consecutive loan spells, William Saliba proved to have been worth the wait for Arsenal.

The centre-back signed in a £27m deal from Saint-Etienne in 2019 but had failed to make an appearance for the Gunners prior to Friday night’s win at Crystal Palace.

Saliba was named as Ligue 1’s Young Player of the Season during a spell at Marseille in 2021/22 and proved he is more than ready for a long-awaited chance in the Premier League.

The 21-year-old was a commanding presence as Arsenal won 2-0 at Palace to begin the campaign with three points, with Saliba cruising through the contest in assured fashion.

Our Man of the Match tonight? 🏆

One of a number of players who have had their careers at Newcastle relaunched under Eddie Howe, Fabian Schar began the new season with a bang against Nottingham Forest.

Schar was excellent in partnership with Dan Burn at centre-back, where he won eight defensive duels and impressed in possession.

The Switzerland international was influential at both ends of the pitch. He made a goal-saving block from Jesse Lingard in the first half to keep the game goalless, before a stunning strike from distance opened the scoring at St James’ Park.

Pick that one out! 🚀

The 2-0 win was the first time in a decade that Newcastle have began a season with a Premier League win on home soil.

Largely written off before a ball had been kicked, Bournemouth marked their return to the Premier League with a 2-0 win over Aston Villa.

Scott Parker’s side were disciplined and determined to take all three points on the South Coast, with Lloyd Kelly producing a captain’s performance on the left of the Bournemouth back three.

A special day at Dean Court! Proud to lead this team. 🍒 pic.twitter.com/vBpN4ycLAC

The 23-year-old led an organised defence and set the tone with a series of strong challenges, while he provided an assist after finding the towering target of Kieffer Moore to head home the Cherries’ second.

Newcastle began the season in impressive fashion with a dominant win over Nottingham Forest, with the Magpies’ midfield axis providing the platform for a strong showing at St James’ Park.

Joelinton’s transformation into a combative midfield powerhouse was one of the narratives of Newcastle’s campaign in 2021/22 and the club’s Player of the Season picked up where he left of last term.

Forest failed to cope with the dynamism and drive of the 25-year-old, whose physical strength and powerful running caused problems all afternoon for Steve Cooper’s side.

He came close to scoring a stunning solo goal and provided the assist for Callum Wilson’s effort, while his partnership with Bruno Guimarães is an exciting one that few opposition midfields will relish taking on this season.

Gundogan’s heroics off the bench sealed the title for Manchester City last season and the midfielder was similarly influential as the champion’s defence began with a win at West Ham.

The Germany international was the hub of an accomplished performance from Pep Guardiola’s side at the London Stadium, as City boasted 77% of the possession in a dominant display of ball retention.

Gundogan’s tempo-setting football and intelligent passing range shone against the Hammers, with his slide-rule pass freeing Erling Haaland to win the penalty that opened the scoring. Frustrated with his lack of starts last season, he will hope for a more regular role this time around and City often exert a greater level of control with Gundogan in the side.

A brilliant opening weekend performance from Kulusevski who started as he finished last season, scoring one and creating another as Spurs thrashed Southampton.

The Sweden international produced a brilliant cross for Ryan Sessegnon to head home an equaliser, before putting the finishing touch on a 4-1 win for Antonio Conte’s side with a trademark curling effort after cutting inside from the right flank.

A threat all afternoon, the 22-year-old proved he is up for the challenge of competing with summer signing Richarlison for a place in the side.

Gross signed a new two-year deal over the summer and started the new season in dream fashion, scoring a brace against the Red Devils to earn the Seagulls a memorable away win.

The 31-year-old was involved throughout with intelligent link-up play and twice found himself in the right place at the right time to turn in from close range.

Pascal Gross has scored more Premier League goals against Manchester United than any other side (6).

32% of his Premier League goals have come against the Red Devils. 😀 pic.twitter.com/rLRirWvvcy

Despite losing key personnel over the summer, Brighton’s opening win proved the club can still be aiming upwards after a Premier League record finish of ninth last season.

Erling Haaland announced his arrival into the Premier League with a debut double, scoring both goals as Manchester City earned a 2-0 win at West Ham.

This was a hugely encouraging performance from the marquee man, who showed in just two flashes what he can bring to this side this season.

Haaland won and converted a penalty to open the scoring, having raced in behind before being brought down by Alphonse Areola. The Norwegian’s blistering pace was evident again as he powered onto Kevin De Bruyne’s pass to score a second, with Haaland almost unstoppable when given a chance to stretch his legs behind a high defensive line.

There will be more difficult challenges for the 22-year-old to navigate as he becomes accustomed to deep defences and high numbers behind the ball, but the early signs are positive for Guardiola who has added a new level of threat to the division’s best side.

Mitrovic made a mockery of doubts as to whether he can cut it in the Premier League, with the Fulham forward brutishly bullying Liverpool’s back four at Craven Cottage.

The Serbian scored twice to secure the newly-promoted side a well-earned point against the Reds, following his record-breaking Championship season with an outstanding Premier League performance.

Mitrovic towered above Trent Alexander-Arnold to open the scoring with a far-post header, before showing fine footwork to beat Virgil van Dijk and win a penalty for his second.

Who said he can't do it in the Premier League. 😀 pic.twitter.com/hLnYPQhe4a

The spot-kick was dispatched in inch-perfect fashion, but it was Mitrovic’s all-round game that most impressed with a staggering 11 aerial duels won as he combatively competed against the Reds’ defence.

Having been out of favour during Fulham’s last season at this level, in Marco Silva he has found a manager reaping the rewards of his faith in the forward.

Read Also – Dear Gooners, Zinchenko is a diamond. From a Manchester City fan