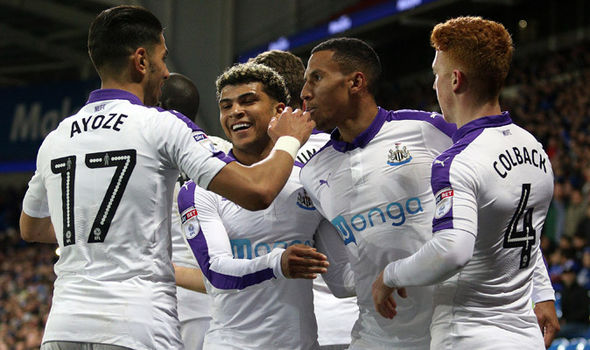 Newcastle produced an emphatic performance as they broke the club record for the most away wins in a season with a 0-2 win over Cardiff.

Christian Atsu and Isaac Hayden’s two goals sparked hope in the Magpies’ title ambitions as Brighton were defeated 0-1 at home to Bristol City.

Cardiff threatened Newcastle in the early stages of the game as they had the ball in the back of the net on two occasions. The first being Sean Morrison’s header from Peter Whittingham’s corner. Fortunately for Newcastle, the referee spotted a foul by the defender on Ciaran Clark.

Junior Hoilett then tapped in a drilled cross from Craig Noone but the linesman clearly saw that the Canadian was offside.

Newcastle did create chances themselves when DeAndre Yedlin fired a shot across goal which was saved by Allan McGregor anews almost deflected into the net.

There were then penalty shouts for Newcastle as Ayoze Perez was pulled to the ground by Greg Halford; no penalty was awarded.

The second half showed an increase in the amount of intensity for Rafa Benitez’ side as they dominated Cardiff in all areas of the field.

Their first goal came ten minutes after the restart when Christian Atsu looped the ball over the wall from a free-kick with ease.

Craig Noone soon missed a glorious opportunity when he was unmarked at the back post and blazed the ball over the bar from close range.

The players in black and white had a few scares towards the end of the game but managed to hold onto their clean sheet, something which could prove to be crucial next weekend as the title could be decided on goal difference.