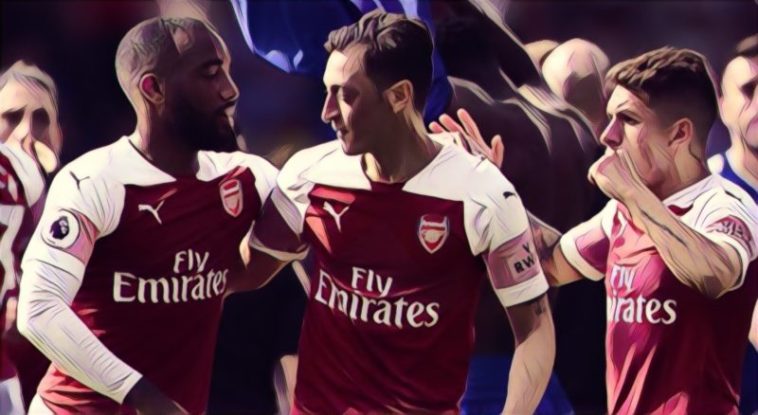 Arsenal got their first away victory of the season as Unai Emery’s men went on to seal a hard fought victory against Cardiff City. Here are five things we learned from the game.

Aubameyang finally gets off the mark

Tipped to win the Golden Boot by many, it wasn’t a great start to Aubameyang’s season as the Arsenal forward had to wait for four games to finally get on the scoresheet.

He got off the mark in fine style though. A flick from outside of the boot from Lacazette saw the ball travel to Aubameyang, who then curled it in from distance to get Arsenal’s second. It was a proper striker’s finish and was just what Aubameyang needed. He had been struggling for the first three games and this goal will do just enough to boost his confidence.

Lacazette makes the most of his chance

Alexandre Lacazette started on the bench for Arsenal’s first three games, but looked really sharp after coming on in all three fixtures. As a result of that, he was deservedly given a start today by coach Unai Emery. Lacazette scored the winner and also set up Aubameyang’s wonder strike giving Arsenal the lead on both occasions. The Frenchman was by far Arsenal’s best player on the pitch and now has surely done enough to start every game.

Lack of discipline from both teams

It was a hard fought victory for Arsenal. Cardiff were playing really well. Arsenal had a lot of possession but could not create much with it. And that frustration lead to the players making unnecessary challenges. The game saw seven players booked from both sides. Monreal, Bellerin, Guendouzi and Xhaka were booked for Arsenal, whereas Cardiff City’s Camarasa, Junior Hoilett and Harry Arter also saw themselves get into the referee’s book. The lack of discipline from both teams could have easily been avoided.

Defence still a worry for Arsenal

Cardiff City had not scored a goal this season coming into this game. But they managed to get two against Arsenal’s defence, which has been awful all four games so far this season.

The Gunners have now managed to keep only four clean sheets in their last 24 League games. They are certainly not the numbers of a team that is aiming to finish in the top four. And Unai Emery knows that. Monreal and Bellerin leave themselves way too far up the pitch at times exposing the defence.

Sokratis’ passing also is a worry. The Greek defender has put Cech in worrying situations way too many times this season already. Arsenal need to sort these defensive problems out soon.

Arsenal signed midfielder Lucas Torreira from Sampdoria this season. The 22-year-old Uruguayan did very well for his national side in the World Cup and has looked amazing every time he has played for Arsenal as well. And even today, Torreira made an instant impact after coming on, assisting Lacazette’s winner.

But it looks like he has still not impressed Emery enough to be a starter for Arsenal. Guendouzi has been brilliant so far, but Xhaka has been a little sloppy recently. In fact, Xhaka’s error lead to Cardiff’s first goal. It would be a surprise now if Torreira does not start the next game for Arsenal.