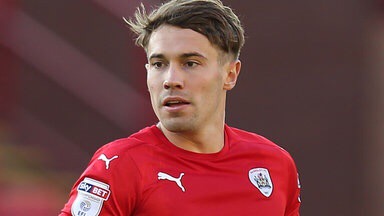 Since his arrival at Oakwell, Barnsley fans have been skeptical of striker Tom Bradshaw. Now with the likes of Sam Winnall and Adam Armstrong elsewhere; can Tom Bradshaw lead the Tykes forward-line?

Upon signing from Walsall last summer, Tom Bradshaw arrived at Oakwell with a respectable career tally. In his two seasons at the Midlands club, Bradshaw scored 34 league goals. Respectively his 17 league goals in the 2015/16 campaign saw the Saddlers reach the play-off semi-finals.

Following his transfer request last summer, Barnsley signed the Welsh international for an undisclosed fee. It is fair to say his first season as a Tykes player was stop-start, so to speak.

Bradshaw scored eight league goals last season, two of them coming in an impressive 3-1 win over Aston Villa. While failing to reach double-figures in the league, the former Shrewsbury Town striker did boast a solid work-rate. Yet Tykes fans would have felt more could have materialised from his partnership with Newcastle United loanee Adam Armstrong.

As the season rolls into October, at this point Tom Bradshaw has scored seven goals in all competitions. This includes four league goals, which is just four away from his totally tally last season. Considering that the Welsh striker more often plays as a lone-striker now, this is a good sign in terms of progression.

Once again this weekend he silenced his critics by scoring two against Millwall, as Barnsley claimed their first away win of the season, courtesy of a 3-1 win at The Den.

Can his desire for an International call-up help?

Having already been capped for Wales at Under-19 and Under-21 level respectively, Bradshaw was given his first senior call-up last year. However since his substitute appearance against Ukraine, he has not been called upon again. But one has to wonder; will Bradshaw’s desire for a Wales senior call-up bolster his performances?

Possessing abundance of pace and quick movement, Bradshaw is in many aspects the ideal forward for most Championship sides. Additionally when presented the opportunity he boasts a decent finish with the ability to shoot with both feet.

Now with all that added together, if he can be presented the opportunities, then there is no reason why the goals cannot keep coming for Barnsley this season. Furthermore his desire to play for Wales grows ever stronger, so would his desire aid his performances for the Tykes this season?

Barnsley fans: What’s your opinion on Tom Bradshaw? Is he capable of scoring 15-20 goals this season? Let us know your thoughts.