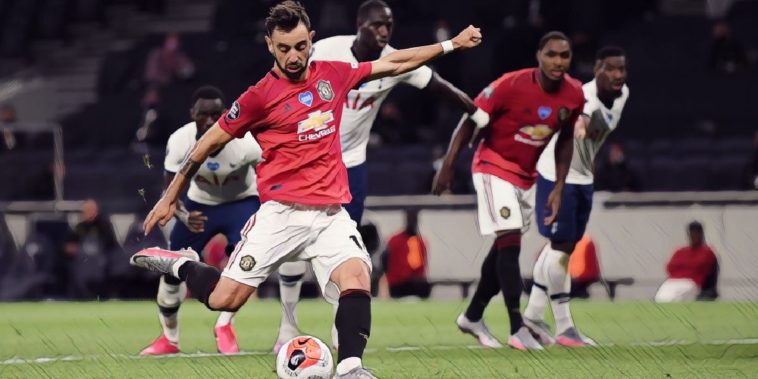 Bruno Fernandes has responded to Jose Mourinho’s jibe about the midfielder’s penalty record, insisting his statistics compare favourably with the division’s best with or without the inclusion of spot-kicks.

The Portugal international signed for Manchester United in the winter window and proved the catalyst behind the club’s strong second half of the season, scoring 12 times and providing a further eight assists as the Red Devils secured Champions League qualification and reached the semi-finals of the League Cup, FA Cup and Europa League.

Fernandes was instantly installed as United’s designated penalty taker with eight of his goals coming from the spot, the number of penalties awarded to Ole Gunnar Solskjaer’s side regularly commented on by opposition supporters.

Jose Mourinho also aimed a thinly-veiled dig in the direction of his former side and compatriot Fernandes in July, declaring they had signed ‘a great penalty taker, one of the best in the world, because he had about 20 to score’.

Fernandes has now shrugged off the comments from the Spurs boss and says he did not feel attacked, preferring to see the positives in Mourinho’s assessment of his start in English football.

“I honestly did not feel stung,” Bruno told A Bola. “I feel that I am a good penalty taker and nothing more, I understand, but what I take from his [Mourinho’s] words, because I’m a very positive person, is that he said I hit penalties well.

“It is a reality, not least since I arrived at Manchester United.”

Fernandes did, however, choose to defend his record, pointing out how his non-penalty goal involvements stack up favourably in comparison to his Premier League rivals since moving to Old Trafford.

“I hear people saying, ‘Ah, he only scores from penalty kicks’… but a little while ago, I saw the statistics and, except for penalties, only Kevin De Bruyne has a higher involvement in goals than me in England when it comes to midfielders,” Fernandes added.