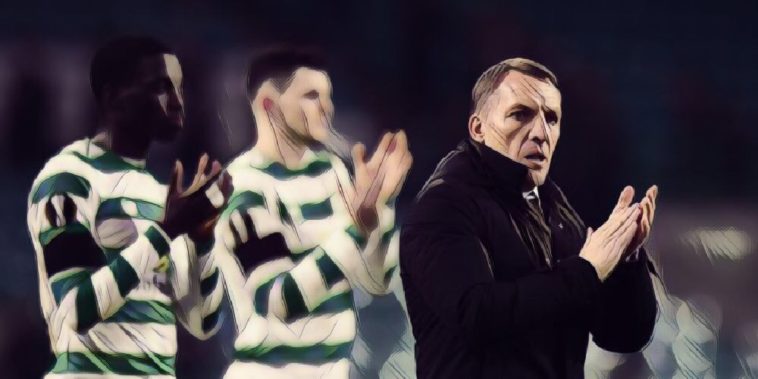 Celtic captain Scott Brown has said that it was a shock to see Brendan Rodgers walk out on the club, but insists that he left the Hoops in great shape.

Rodgers took the opportunity to return to the Premier League earlier this week, replacing Claude Puel at Leicester City on Tuesday.

He left Parkhead with Celtic eight points clear at the top of the Scottish Premiership, and still in with a shout of securing a third consecutive domestic treble.

Rodgers decision to return to the English top flight has sparked outrage among the Celtic faithful, who unfurled a banner about their former boss during their 2-1 win over Hearts on Wednesday, although club captain Scott Brown has reminded them that the club are in ‘a great situation’, adding that he was a ‘brilliant’ manager.

“It is always going to be a shock when a manager leaves a club, but we need to just continue what we are doing,” he told Sky Sports.

“He has left us in a great situation and we need to make sure we keep going on for him as well.

“There is always going to be a lot of stick but, for me, he was brilliant on a personal level and that is what really counts.

“It is sad to see him go but the fans were unbelievable [at Tynecastle] today, singing for 90 minutes. Whether it is Lenny or whether it was Brendan, they are always following us.

“It is never going to be a great time to have a manager leaving but he has left us in a great place. For me personally, it was sad to see him leave.

“But we have another great manager coming in who will build on what Brendan has done and hopefully keep it going until the end of the season.”