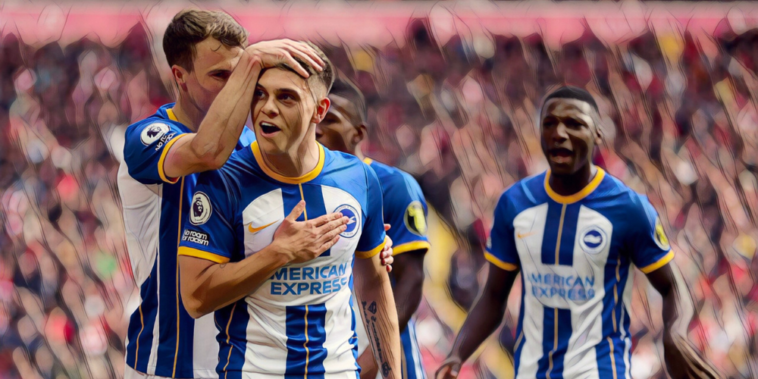 Brighton host Tottenham in the Premier League this weekend, knowing a win would move the Seagulls above Spurs in the table.

The north Londoners arrive at Brighton without a win in their last two games in all competitions and will be hoping to bounce back from a derby defeat last time out.

Here is everything you need to know about Saturday’s showdown on the South Coast.

Brighton began their new era under Roberto De Zerbi with a positive result last weekend, earning a 3-3 draw at Liverpool in a performance that perhaps warranted more.

The Seagulls were brave and proactive in possession as De Zerbi followed the blueprint left by his predecessor, Graham Potter, with Brighton racing into a two-goal lead inside 17 minutes at Anfield. The intensity of Brighton’s football will have pleased those concerned following Potter’s exit and De Zerbi’s reign promises entertainment if nothing else.

Leandro Trossard scored a hat-trick at Liverpool to maintain his excellent start to the season, while Solly March could also be set for a key role in the new-look side. Brighton have lost just once in the Premier League this season and sit in the Champions League places as a result.

Tottenham’s unbeaten start to the Premier League season was ended in emphatic fashion last weekend, as Spurs crashed to a 3-1 defeat in the north London derby.

Arsenal were the better side and deserved all three points, with Spurs lacking conviction and quality when their limited attacking opportunities arrived.

Despite a strong start in terms of results, there are concerns regarding the underlying statistics from Antonio Conte’s side this season. Spurs rank eighth in the Premier League for big chances created, 10th for progressive passes and 12th for average possession.

Conte called on his side to be more clinical after a goalless draw with Eintracht Frankfurt in the Champions League in midweek, as Spurs prepare to face a Brighton team whose xGA trails only Manchester City and Arsenal this season.

The away team won both fixtures between the teams in the Premier League last season, with Brighton earning a 1-0 win in north London in April.

Leandro Trossard’s superb late goal secured all three points for the Seagulls who struck a damaging blow to Spurs’ hopes of a top four finish.

In a game of few chances, Trossard jinked into the area in the last minute to prod a fine finish past Hugo Lloris, as Brighton followed a win at Arsenal the previous week with successive north London victories.

Is Brighton v Spurs on TV?