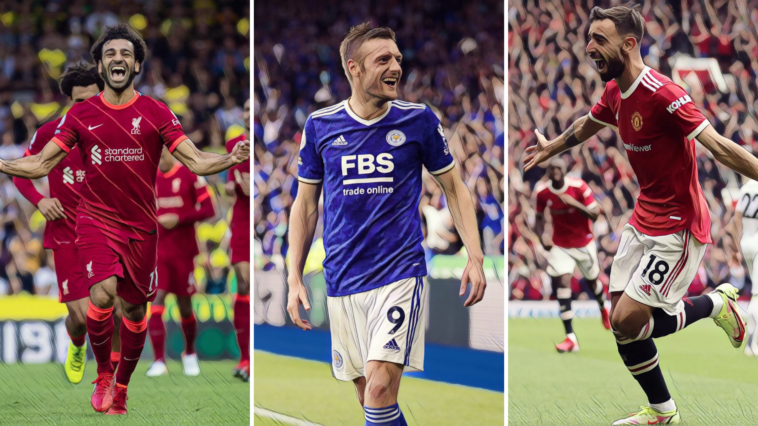 There will be plenty of leading names bidding to catch Fernandes as the 2021/22 season begins to take shape in the coming weeks however, and we’ve decided to look at some of the favourites to finish as the Premier League’s leading scorer.

So for those of you who like to follow the best betting deals like the offer of a $5 deposit casino, here are the bookmakers’ five favourites to win the Premier League’s Golden Boot.

Winner of the accolade during the 2019/20 season, Vardy’s numbers dropped slightly last season despite a highly respectable 15 league goals for the campaign.

Vardy has reached double figures in each of the past six seasons and has amassed 20+ goals on three occasions, but at 34-years-old has been priced at distant odds of 16/1 to win a second Golden Boot.

Vardy opened his account for the season with the winner against Wolves on the opening day and remains Leicester’s leading light at centre-forward, but the emergence of Kelechi Iheanacho and summer signing of Patson Daka could see the veteran’s minutes managed over the course of the campaign.

The early pacesetter in the race for the Golden Boot following his hat-trick against Leeds, Fernandes has been a regular source of goals since his arrival at Manchester United in January 2020.

Fernandes has scored 29 league goals since his arrival into English football, with only Harry Kane having scored more (30) during that same period.

Bruno Fernandes is the first Manchester United player to score a hat-trick on the opening day of a Premier League season.

The 26-year-old continues to post incredible numbers from midfield and will be central to the Red Devils’ hopes of a successful campaign once again.

Henry’s landmark of four Golden Boots is now within Kane’s grasp this season, though the forward has endured an unsettled start to the campaign following a period of quarantine and speculation surrounding his future.

Kane missed Tottenham’s opening weekend win over Manchester City, but could return for the trip to face Wolves on Sunday after rejoining his Spurs teammates in training on Tuesday.

Manchester City remain interested in signing the England captain before the closure of the transfer window, a potential move that raises the prospect of Kane receiving service from the likes of Kevin De Bruyne at the Etihad.

Chelsea’s pursuit of a centre-forward saw the west London side splash a record £97.5m to sign Romelu Lukaku from Inter Milan, the summer signing ranked as the second favourite to win the Premier League’s Golden Boot this season.

Lukaku scored 113 goals in 252 league appearances across his previous spells in England, and returns to the Premier League as an improved player following two prolific seasons at the San Siro.

Back in the building! @ChelseaFC pic.twitter.com/wcAXdnIhzZ

The Belgium international scored 64 goals in just 95 appearances in all competitions for Inter Milan and was named as Serie A’s Most Valuable Player following the club’s title success last term.

Set to spearhead a Chelsea team containing the likes of Hakim Ziyech, Christian Pulisic and Mason Mount, there should be chances aplenty for Lukaku at Stamford Bridge this season.

Mohamed Salah is the bookmakers’ favourite to win the Premier League’s Golden Boot this season, with the two-time winner having opened his account with an obligatory opening weekend goal against Norwich.

Salah became the first player to score on five consecutive Premier League opening weekends at Carrow Road on Saturday evening and will be looking for a third Golden Boot in 2021/22 after finishing as runner-up last season.

The Egyptian has scored more Premier League goals (96) than any other player in the division since signing for Liverpool in 2017, ranking ahead of Harry Kane (88) and Jamie Vardy (77).