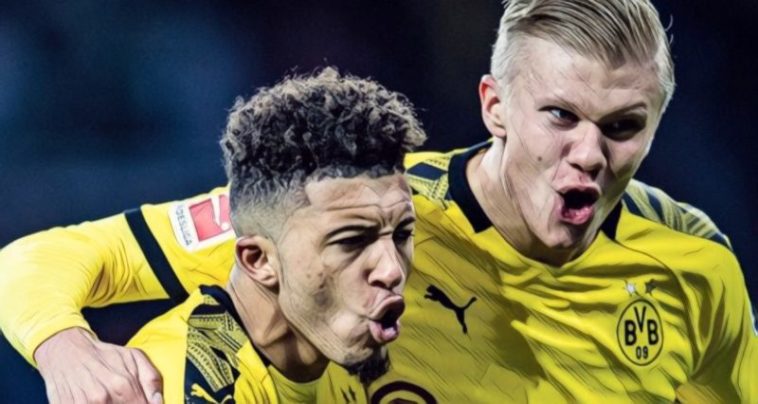 There are fewer things that excite football fans more than the emergence of the next big star, precociously talented youngsters who burst onto the scene in their teenage years.

Teenagers are often afforded greater patience from supporters as they learn their game, but as a player enters his twenties he is expected to become an established name in the side.

There are currently several players across Europe flourishing into leading talents in the early stages of their twenties and we’ve decided to pick out some of the best 20-year-old players on the planet at present.

Here are our rankings of the five best 20-year-olds in European football right now:

Football fans may just need to start practicing the pronunciation of Dominik Szoboszlai with the midfielder becoming a household name, starring as the latest prospect to emerge off the production line at Red Bull Salzburg.

The inclusion of a player featuring in Austria’s Bundesliga may be contentious ahead of more established names such as Vinicius Junior, Sandro Tonali and Reece James, but it is difficult to look beyond the Hungarian’s performances for Salzburg so far this season.

Szoboszlai was named as Austria’s Player of the Season after inspiring Salzburg to a third consecutive league title last season and has raised his standards even higher this time around, scoring eight goals in just 12 appearances in all competitions including a hat-trick against SKN St. Polten last time out.

The 20-year-old has also starred in this season’s Champions League, scoring in both legs of Salzburg’s play-off victory against Maccabi Haifa before netting stunning strikes against both Lokomotiv Moscow and Atletico Madrid in the group stages.

No player in the Champions League has completed more crosses than Szoboszlai who has been one of the tournament’s most creative players thus far, whilst he has also starred at international level and scored a stoppage-time winner to book Hungary’s place at Euro 2021 last month.

Europe’s leading clubs are closely monitoring the jewell in an impressive Salzburg side, expect his reported €25m release clause to be activated sooner rather than later.

Phil Foden is beginning to earn the regular inclusion at Manchester City his talent deserves, with the youngster having long been hyped as a future star for both club and country.

Pep Guardiola’s reluctance to allow the 20-year-old to leave on loan in recent seasons is a testament to his ability, the Catalan keen for the academy graduate to develop his game under his own watchful eye.

Foden was brilliant following the Premier League’s restart in June and looks ready to step into the role vacated by David Silva’s summer departure from the Etihad, having scored five goals and provided two assists in nine starts in all competitions so far this season.

The Stockport-born starlet is blessed with brilliant balance, vision and creativity, gliding across the turf and always happy to receive possession in tight areas of the pitch.

His emergence is a huge boost to England who have lacked midfield talents of his style and skill, Foden bouncing back from the indiscretions of his first call-up to score twice against Iceland during November’s international break – becoming the youngest player in the Three Lions’ history to score twice in a Wembley fixture.

10 – Phil Foden has scored 10 goals for Manchester City in all competitions in 2020; excluding penalties, this is the most by any midfielder for Premier League clubs this calendar year. Star. pic.twitter.com/qBzYDGJYiy

Already at just 20-years-old he has won six major honours and provided 33 goal involvements in just 41 starts for Manchester City, Foden a special talent and one set to star for club and country in the coming years.

Alphonso Davies signed for Bayern Munich from MLS side Vancouver Whitecaps with huge potential, but perhaps even the Bundesliga giants could not have anticipated his rapid rise to stardom.

Davies was signed as winger but has flourished further back for the Bavarians, becoming arguably the world’s most exciting full-back and the exhilarating road runner of the European champions and treble winners.

The Canadian seized his opportunity last season following injuries to the likes of Lucas Hernandez and Niklas Sule, becoming an irreplaceable figure in the Bayern side as they conquered all before them.

Davies is fast, scarily fast and it’s that scintillating speed that helps him at both ends of the pitch, blitzing past opposition players and recovering rapidly on the occasions he is caught further up field.

Far more than simply a speed merchant, however, he is technically gifted and comfortable in tight areas, his meteoric rise having seen him labelled by some as the best left-back in world football last season.

An inspiring journey from refugee camp to the pinnacle of the world game, Davies’ star is one that is expected to continue rising as part of the best club side on the planet at present.

Champions League Team of the Week

Borussia Dortmund is currently home to some of the best young players in the game and amongst their very finest is Jadon Sancho, a player whose decision to leave the Premier League in search of opportunity has been vindicated in some style.

Sancho has improved season upon season at Dortmund and was one of the stars of the 2019/20 Bundesliga campaign, scoring a staggering 17 goals and providing 16 assists in just 25 league starts for the German side.

His numbers are astounding for a player who only turned 20 earlier this year, Sancho’s sensational form having attracted significant interest from Manchester United during the summer.

Dortmund quickly placed a British transfer-record price-tag on his shoulders to ward off suitors, though it is difficult to argue the huge fee would not be worth it given his performances in recent seasons.

The winger is a brilliant technician and bamboozles opponents with his fleet-footed style, though the sublime skills are mixed with substance with Sancho’s productivity largely unrivalled amongst players of his age.

Sancho has amassed 59 goal involvements in just 66 Bundesliga appearances for Dortmund over the past two full campaigns, and whilst his form has dipped during the opening months of the new season he remains amongst the most exciting prospects in Europe.

Expect interest from the Premier League – and perhaps elsewhere –  to return next summer, Sancho seemingly destined to become the most expensive English player of all-time.

Star Spangled: Rating the ability of the eight Americans to feature in this season’s UCL

Erling Haaland leads our rankings as the best 20-year-old footballer in European football right now, a player who seems to be breaking record after record with each passing performance.

Haaland burst onto the scene with Red Bull Salzburg last season and announced himself to the world with a hat-trick on his Champions League debut, his prolific form for the Austrian outfit leading to a winter window move to Borussia Dortmund.

The forward has continued to shatter landmarks and milestones with the Germans and scored a hat-trick as a substitute on his debut, firing home 33 goals in 32 appearances for Dortmund since moving to the Westfalenstadion.

Haaland has now scored a staggering 62 goals in all competitions since the start of last season, in addition to just six in seven appearances since making his debut for the Norwegian national side.

No player in history has ever scored 15 Champions League goals in quicker fashion than Haaland, whose record stands at a mind-boggling 16 in 12 games since his debut in the competition.

Haaland is a huge and powerful presence with searing speed to get in behind defences, rarely blinking when presented with goalscoring opportunities as he lashes home goals with that familiar left-footed style.

The sky really is the limit for a player who has already altered perceptions in his fledgling career to date, no goalscoring record seemingly safe from a player set to define a generation.