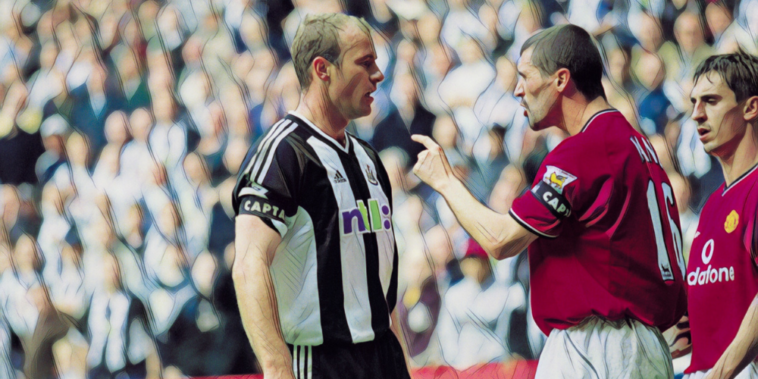 Manchester United travel to face Newcastle in the Premier League’s festive schedule, a clash between two clubs that have served up some memorable encounters in past seasons.

Recent campaigns have seen Newcastle struggle to compete with the Premier League’s best, but the Magpies’ billionaire takeover has raised optimism that the North East outfit can soon challenge the established elite.

Having locked horns with Manchester United during unforgettable title races in the mid-1990s and competed in the Champions League following the turn of the millennium, there will be hopes that Eddie Howe’s team can compete on a level playing field with the Red Devils in the near future.

Ahead of their latest meeting, we look back at some classic Premier League contests between Manchester United and Newcastle.

Arguably the most famous Premier League meeting between the two teams, Newcastle issued a statement of intent after thrashing the defending champions at St James’ Park in 1996.

Newcastle had blown a 12-point lead in the title race the previous season, as the Red Devils clawed back an improbable deficit to claim a third Premier League crown and break Geordie hearts.

The Magpies regrouped over the summer and splashed a world-record fee of £15m to bring boyhood Newcastle fan Alan Shearer to the club, with the forward at the centre of an exhilarating attacking performance from Kevin Keegan’s side.

Newcastle took the lead through a controversial goal from Darren Peacock despite protestations that the ball had not crossed the line, before goals from David Ginola, Les Ferdinand and Shearer put Keegan’s side in a commanding position.

Philippe Albert added the fifth with one of the most iconic Premier League goals scored at St James’ Park, the defender wandering forward before lifting an audacious chip over the stranded Peter Schmeichel.

The turn of the millennium saw Sir Bobby Robson’s arrival raise expectations at Newcastle, with the Magpies securing back-to-back top-four finishes under the guidance of the North East native.

Newcastle went toe-to-toe with the defending champions during the early months of the 2001/02 season, a fixture which saw Roy Keane sent off for the visitors after swinging a punch in the direction of Alan Shearer.

Laurent Robert opened the scoring with a sensational free-kick for Newcastle, before Ruud van Nistelrooy levelled the scores. The Magpies regained the advantage through Rob Lee and Nikos Dabizas, but the sides headed into the final ten minutes level after Ryan Giggs and summer signing Juan Sebastien Veron restored parity.

Alan Shearer – having been at the centre of the drama involving Keane – fired home a late winner as Robson’s 100th game in charge ended in a memorable three points for Newcastle.

The following season delivered another classic as the two teams shared eight goals at Old Trafford, with Ruud van Nistelrooy scoring a hat-trick as Manchester United edged an end-to-end contest.

There were question marks regarding the Red Devils after relinquishing the title to Arsenal and an indifferent start to the new season, but Sir Alex Ferguson’s side produced an emphatic response to their critics with Van Nistelrooy in clinical mood.

Paul Scholes opened the scoring before Olivier Bernard equalised with a fortuitous cross that caught out Fabien Barthez, before Van Nistelrooy’s brace gave the home side a comfortable cushion.

Manchester United produced a ruthless performance to turn up the title pressure on Arsenal, dismantling a Newcastle side who finished the campaign in third and had been in contention for the Premier League themselves before a late-season wobble.

The trip to St James’ Park had been viewed as an acid test for Sir Alex Ferguson’s team following a midweek Champions League defeat to Real Madrid, with the Red Devils issuing the perfect response to move three points clear of Arsenal.

Jermaine Jenas had opened the scoring for Newcastle, but United hit back to score four times before the break in a free-flowing attacking performance.

Paul Scholes – who hit a hat-trick – and Ruud van Nistelrooy completed the scoring for the visitors in the second half, with Newcastle overwhelmed and well-beaten.

United secured a point at Arsenal the following week and went on to claim the Premier League title after amassing an 18-game unbeaten run since defeat to Middlesbrough on Boxing Day.

Alan Pardew’s side threatened an upset of the league leaders during a 2012 meeting, taking the lead on three occasions at Old Trafford before a late winner from the home side sparked wild celebrations.

James Perch, a Jonny Evans’ own goal and a Papiss Cisse strike thrice put Newcastle ahead, but the Red Devils fought back with equalisers from Evans, Patrice Evra and Robin van Persie.

The Magpies found themselves under mounting pressure in the closing stages and the inevitable came as Javier Hernandez slid in a 90th-minute winner for United, who extended their lead at the top of the Premier League to seven points.

It proved a lead that Sir Alex Ferguson’s side would not relinquish as the Red Devils claimed a 13th league title under the Scot’s management, in what proved the final season of his record-breaking managerial career.