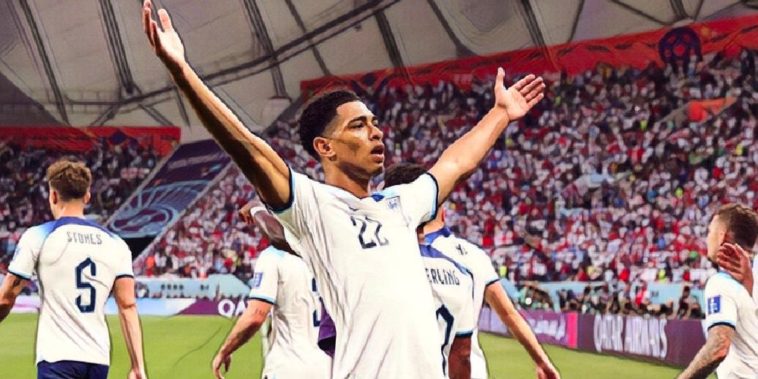 Jude Bellingham put in a hugely influential display as England got their World Cup underway with a convincing 6-2 win over Iran.

Having reached the semi-finals four years ago, Gareth Southgate’s side dominated the ball from the off as Iran looked content to try to frustrate the favourites and hit on the counterattack through the dangerous Mehdi Taremi. The first half was, however, disrupted as first-choice Iranian goalkeeper Alireza Beiranvand was treated for a clash of heads, and despite trying to carry on, he soon had to admit defeat and be replaced.

In the 35th minute, however, England did make the breakthrough that their dominance deserved, Luke Shaw putting in a lovely first-time cross from the left that was met by Bellingham who guided a superb header into the top corner for his first international goal.

That goal seemed to settle England and break Iranian hopes, and just eight minutes later, the Three Lions got a second – the much-criticised Harry Maguire nodding down a corner from the left before Bukayo Saka thrashed home a fine left-footed half-volley.

It was three as the game ticked into 14 minutes of stoppage time, the influential Bellingham picking up a loose ball in the middle of the park and driving towards goal. He laid the ball into the path of Harry Kane in the right channel, before the skipper’s drilled cross picked out Raheem Sterling who finished first-time beyond substitute ‘keeper Hossein Hosseini.

Bukayo Saka has enjoyed a fine start to the season with Arsenal, and the 21-year-old scored his second of the afternoon on 62 minutes, picking up the ball on the right, shifting onto his favoured left before firing through a crowd of bodies.

There was a blot on the England copybook as Iran pulled a goal back through their talisman Taremi, the Porto star getting in behind Harry Maguire to get on the end of an Ali Gholizadeh reverse ball before lashing past Jordan Pickford.

Jude Bellingham got England off the mark!#BBCWorldCup #BBCFootball #FIFAWorldCup pic.twitter.com/Gb0rSEkZ59

However, the Three Lions quickly re-established their four-goal advantage, Marcus Rashford scoring just 49 seconds after being introduced with a composed left-footed finish inside the area.

In the 90th minute, Bellingham then picked out the perfectly timed run of substitute Callum Wilson, the in-form Newcastle man racing in behind the Iranian defence, before unselfishly squaring it to Jack Grealish who made it six.

In the 12th minute of second-half stoppage time, VAR would conspire to award Iran a penalty for a shirt pull by John Stones – even despite them not awarding England a spot-kick in the first half for a much more obvious foul on Harry Magure – but Taremi stepped up to net his second of the afternoon with what was the very last kick of the afternoon.

Much had been made of the potential setup coming into the game, and Southgate opted to go with a 4-3-3, a system that really seemed to bring the best out of Jude Bellingham who was involved in a number of England’s best moments.

Speaking after the game, the Borussia Dortmund star was pleased with his side’s creativity, but disappointed to have conceded twice.

“Really good day for us,” he told BBC One. “I think six goals in a World Cup game is really impressive regardless who you play against. I think they came out really well, really strong, hard to break down and we didn’t have anything clear for quite a while.

“I think with more goals we opened them up, but the start was tough and we had to dig it out when we wasn’t getting it all our way. It’s important that we learn how to create chances against them kind of sides but we are a bit disappointed with the two goals [conceded] to be honest.”

Asked about becoming only the second teenager to score for England at a World Cup, he said: “I thought it had missed. I feel like it took ages to loop into the goal. But I told you I want to score more goals for Dortmund and for England last year.

“I was in the right position. It was a brilliant ball by Shaw and I was there to flick it away. A really proud moment for me.”

The win puts England top of Group B before Wales’ meeting with the USA later today, and the teenager said a win in the opening game will lessen the pressure before England’s final two group games.

“Yeah, definitely [it lessens the pressure],” he said. “Wins do that and when you win games, you are at ease for a bit longer and you know there’s a bit [of pressure] off you for the next two.

“We’ll still be at the same level trying to perform and get two more wins because that’s how we want to be and carry that mentality into the rest of the tournament.”