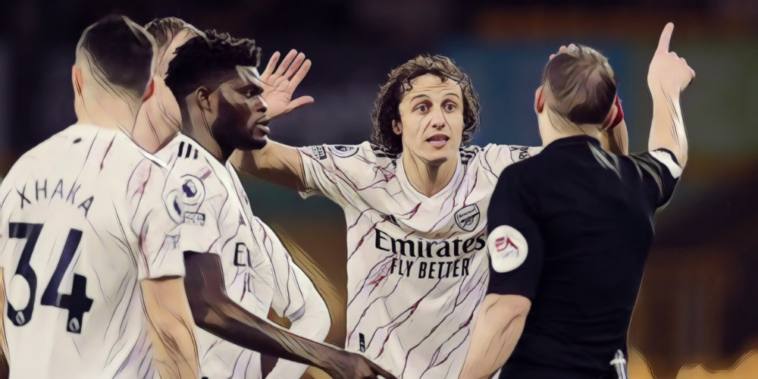 Hector Bellerin says that Arsenal are ‘losing against ourselves’ after two reds cards at Wolves added to the club’s woeful disciplinary record this season.

Arsenal’s seven-game unbeaten run in the Premier League was ended following a 2-1 defeat to Wolves on Tuesday, the Gunners taking the lead at Molineux before crashing to defeat following the dismissals of David Luiz and Bernd Leno.

Nicolas Pepe’s individual effort had put the north Londoners ahead in the clash, only for the game to turn on the stroke of half-time as Luiz was dismissed for bringing down Willian Jose in the penalty area.

Ruben Neves stepped up to emphatically convert from the spot, before Joao Moutinho’s stunning effort from distance put Wolves ahead as the home side made their man advantage count.

Arsenal’s hopes of a comeback were all but ended after Leno was sent off for handling outside of his penalty area, and Bellerin admits the Gunners’ continued ill-discipline is proving costly this season with the club’s five red cards now two more than any other side.

“One hundred per cent [we’ve had too many red cards],” Bellerin said, as per the Evening Standard.

“We’ve shown that when we’re 11 against 11 on that pitch, it’s completely different. We had complete control in the first half and we probably should have been 2-0 up by the end of it. We paid for those mistakes.

“I always say that teams are not beating us, we are losing against ourselves. It’s for us to learn. Hopefully this will be the last time. We were on such a good run, great momentum, great confidence in the team.

“We just need to forget this step because situations like this are not going to happen very often. We’ll go on to the next one.”