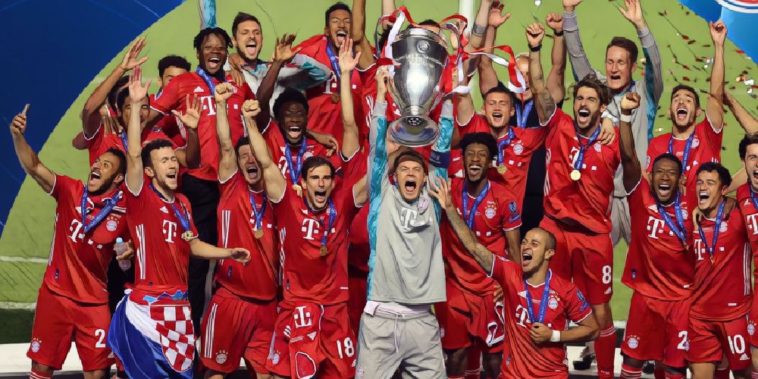 Kingsley Coman was the hero as Bayern Munich became Champions of Europe for the first time in seven years to complete the clubs second ever treble with a hard-fought 1-0 win over PSG.

Bayern started the brighter of the two sides, but the first real chance would fall to PSG on 17 minutes, Neymar’s powerful low shot brilliantly saved by the feet of Manuel Neuer after the Brazilian had been slipped through by Kylian Mbappe.

Just minutes later Bayern’s 55 goal striker Robert Lewandowski swivelled expertly in the box and struck against the post, before PSG’s 102 cap Argentina international Angel Di Maria fired over the bar after finding himself in space in the box.

20-year-old Mbappe would be handed a golden opportunity to open the scoring just before the break, but the youngsters tame shot went straight at Neuer from eight yards out.

After the break, Bayern began to dominate, with PSG struggling to get the ball into their talented front three as easily as during the opening period, and it felt like it was only a matter of time before Thomas Tuchel’s side would be made to rue their missed opportunities.

Bayern’s passing in the final third finally clicked in the 59th minute, a good move ending with the unmarked Kingsley Coman heading in at the back post following a sumptuous ball from Joshua Kimmich – Coman having perhaps been a surprise inclusion from the start in favour of Ivan Perisic.

Kingsley Coman has won his 20th major trophy in his professional career at the age of just 24.

He’ll have more trophies than birthdays at this rate. pic.twitter.com/PxZVvoA8sA

The goal initially seemed to shake the perennial French champions as Bayern created a whole host of chances in the immediate aftermath of the opener, the Bundesliga club probing down the flanks.

PSG did go close on 70 minutes when a sublime reverse pass from Angel Di Maria found Marquinhos in space in the area, but the man mountain that is Manual Neuer once again used his feet to pull off a brilliant save.

While PSG tried to muster a response in the dying stages, they ultimately lacked enough creative quality against Hansi Flick’s well-drilled side, who battled for every ball until the death to become champions of Europe for a sixth time, an incredible turnaround from when the Bavarian side sacked Niko Kovac following a 5-1 loss to Eintracht Frankfurt in November.

Analysing his former side, former Bayern midfielder Owen Hargreaves praised the influence of Flick following his appointment, Bayern becoming the first team to win the Champions League by winning every single game of the campaign.

“Hansi Flick has found all the right decisions at the key moment and today that decision was Kingsley Coman,” Hargreaves told BT Sport.

“This is one of the greatest Bayern teams ever. Flick’s turned this team into an absolute machine. Everyone in Germany is blown away, the football has blown everyone away.

“Last year Liverpool outplayed them and we thought it was the end of an era and now it’s the start of an era. Leroy Sane is still to come into this team.”