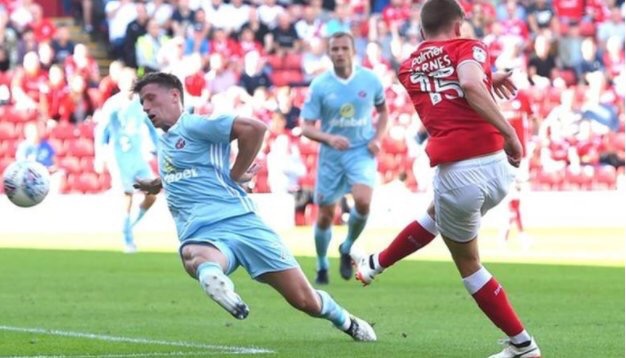 Barnsley inflicted a crushing defeat on relegated Sunderland on Saturday, to move ahead of them in the EFL Championship.

Sunderland travelled to Barnsley with fond memories of Oakwell from the 2006/07 season. Over 8000 fans travelled to the South Yorkshire club that day and saw a 2-0  victory for the visitors, with late goals from Grant Leadbitter and David Connolly. However the return to the home of Paul Heckingbottom’s men wasn’t a happy one.

It was another spineless and pathetic performance from Sunderland, despite starting off well. The away fans creating the best atmosphere so far this season but James Vaughan’s inability to finish would ultimately prove costly as the former Bury striker failed to test goalkeeper Adam Davies. George Honeyman fluffed his lines when he could’ve shot but instead tried to square it for Grabban allowing the centre half to intervene. George Moncur had the first Barnsley chance when Jones lost possession inside his own half before he got away from Cattermole who stupidly slid in befire forcing a save from Robbin Ruiter making his league debut.

Barnsley eventually broke the deadlock on the half hour mark through on loan Chelsea striker Ike Ugbo. It started when Oviedo got too tight on the half way mark allowing Adam Hammill to run at Sunderland, outmuscling Ndong who didn’t put up much of a fight. The cross was played in by the Barnsley winger but was too close to Ruiter who made a good save, only for it to fall to Ugbo who turned in past Koné – who made a half hearted attempt to keep it out.

Not long after, Harvey Barnes doubled the home side’s advantage with a well struck volley past the helpless Ruiter. This time It started when Oviedo failed to get tight enough to close down Hammill. He played in an average cross which centre half Browning headed away, only for Barnes to smash it past the Dutchman.

Just before half time Vaughan was clean through only the goalie to beat on the edge of the area when the Barnsley centre half brought him down. He was the last man but strangely only a yellow card was shown to Liam Lindsay. The resulting free kick from McGeady sailed wide.

An uneventful second half didn’t see the visitors improve. A poor pass from Honeyman caught Ndong on his heels and allowed Ugbo to lead the counter attack. The Chelsea academy loanee saw the overlap of George Moncur who thrashed it high into Ruiter’s net from inside the area in the top left corner, a place where no goalkeeper would’ve gotten to.

Sunderland never really had anymore chances apart from Grabban’s long range effort was straight at Davies who should’ve caught it but instead turned over.

None of the three Barnsley goals could’ve been saved by Dutchman Robbin Ruiter but could’ve been prevented by his defence. Oviedo was more focussed on attacking and often jogged back to position. Koné’s heart wasn’t in it and has a massive ego ever since his mega money contract in August last year. Browning looks a bit inexperienced and Jones just didn’t look up to it. As for substitute Khazri he got booed on by the visiting support, especially after he strolled up the touch line to the bench with a frothy coffee. Not only that, the Tunisian refused to retrieve the balls he kicked into the net in pre-match training and insisted the coach passed him them back. Again, like Koné, he could be a game changing player but neither of them want to play for the shirt, as the fans correctly sang, both of which are just chancers with massive, inflated egos.

Sunderland’s players got booed down the tunnel at full time with only Aiden McGeady holding his hands up and then a fan launched a bottle onto the pitch hitting Ruiter’s foot but the Dutchman also held his hands up. Grayson said the fans have a right to show their discontent and if the Wearsiders are going to even think about promotion they need to improve in almost every area of the pitch including a striker that can finish.